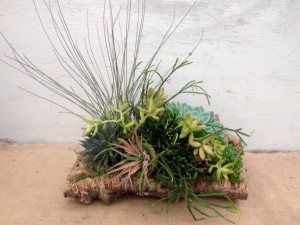 Succulents can be quite colorful…

Have you found a spot this year to try a few succulents? These tough plants will make any sunny  spot more interesting, come in all shapes and sizes, and can be combined with air plants and others that don’t mind dry feet. 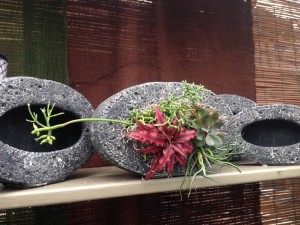 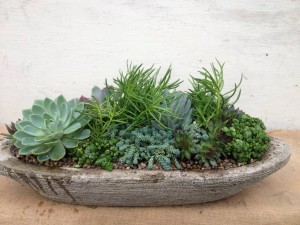 A succulent planting in a customer’s stone trough…

Think about using them with purslane, portulaca, creeping thyme, Mexican heather, bulbine, yuccas, or anything else that likes it hot and dry. 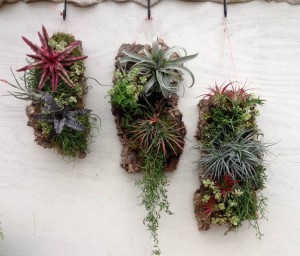 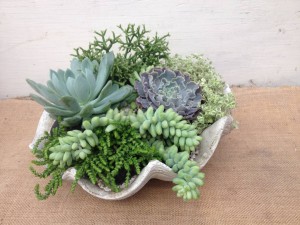 Going into the warmer months many succulents can be used.  Some are winter hardy, and those we’ll always have outside in the nursery. Tender succulents that you’ll need to bring inside when fall arrives can be found in the greenhouse.

If you have a dry, sunny spot in your landscape, try a few of the hardy sedums. If the drainage is good, they’ll be happy and will spread, though the test of their hardiness will be in the winter. 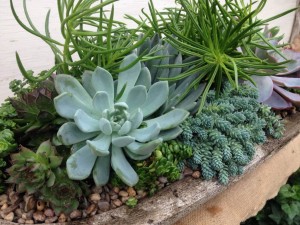 Hen and chicks (Sempervivum species) is extremely cold hardy and will breeze through the winter if they’re not waterlogged. Soggy, cold soil is definitely not to their liking!

Keep in mind that a single pot filled with one type of succulent can be as beautiful as many in combination and, with the right container, can be quite dramatic. So there’s no need to feel intimidated; just dive in, pick a plant you like, and have fun! 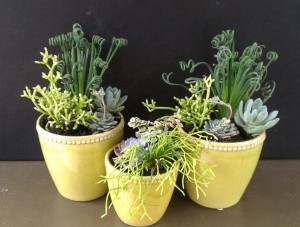 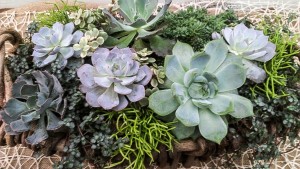 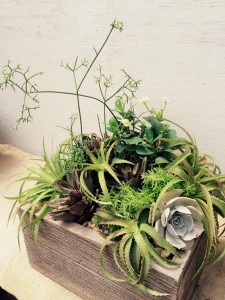 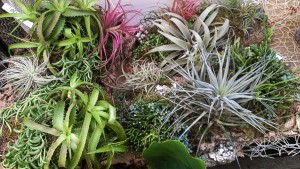 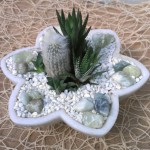 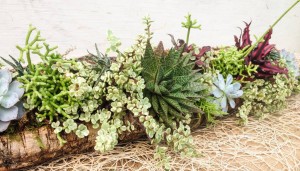 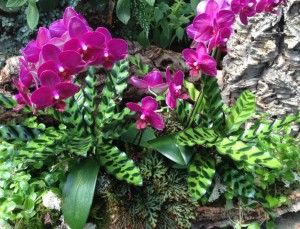 This summer’s wet, cool weather might have kept many of you out of your gardens, but we’ve managed to stay busy in the greenhouse putting together arrangements filled with orchids, succulents, houseplants, and so much more…here’s a peek at some of them. We regularly have folks who stop in just to see what we’ve been working on! All of these arrangements are composed of live plants, no cut flowers here.

Orchids add elegance to any container, and  we love working with them. Here, the beautifully patterned leaves of a calathea contrast with the dark selaginella trailing over the edge. The houseplants shown with the orchid are actually planted in the container to make the care easier – our advice is always to feel where the plant is in the arrangement and water a bit when dry. Of course, some plants will need more or less water than others. For example, orchids last longest when they’re not overwatered! 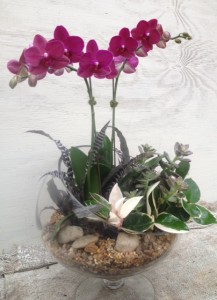 The terrarium arrangement shown here was presented as a going away gift and was planted using pebbles, larger stones as accents, soil  and aquarium charcoal to keep the potting soil fresh. Here the care will again be to monitor the soil moisture carefully and water when it’s completely dry. The various leaf textures and colors of the succulents in the glass container make this arrangement interesting. 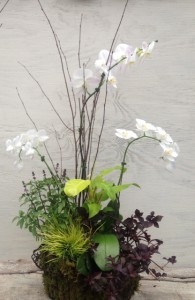 As you can see, we’ll put orchids in just about any container and with just about any plant! In fact, the next arrangement shown uses a combination of houseplants, herbs, annuals and perennials with orchids. It was one of a pair used for a wedding anniversary celebration. So the celebrants were able to continue to enjoy the arrangement even after it was taken apart. Hopefully the Thai basil went in containers or the herb garden, and the perennial miniature grass-like acorus and purple leaf trailing annual irisene found new homes in the garden as well. 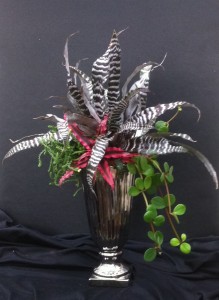 Finally, the silver container was given in  memory of someone…the longlasting and low maintenance  houseplants of trailiing pepperomia and cryptanthus make excellent companions. It’s gratifying, also, to know that whoever is on the receiving end will be able to enjoy this longer than a fresh flower arrangement could ever hope to last.

We’re looking forward now to a new season, with fall right around the corner, and a whole new world of possibilities for creative arrangements – we’ll keep you posted. Meanwhile, if you’re in Birmingham, stop in – there’s always something going on in our design area!