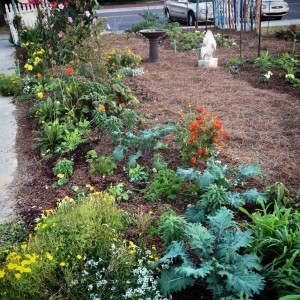 The ‘better late than never garden’ is certainly living up to its name, since it was planted at the beginning of November 2014, and most of it finished just prior to the hectic holiday season, a full month later than I would have liked. This ‘better late than never’ schedule is working out okay so far, though, as the plants are growing steadily. Of course, more updates will follow, documenting successes and the inevitable failures that every garden and gardener has.

Most of these pictures were taken quickly  very early on a mid-December morning in the middle of the holiday rush. Since there were other things that needed to be done, I couldn’t linger; but now, with the new year and more time, here’s an overview of the planting process and selection in this ‘better late than never’ winter garden. 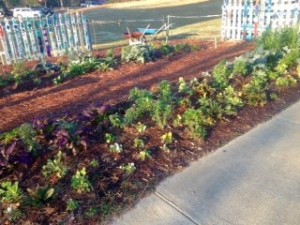 Let me admit right off that I’m not a “garden designer”. I can’t tell you that I drew a beautiful rendering of what I envisioned this garden to be come spring. No, the reality is that I grabbed a few packs of this and a few pots of that (usually in the middle of a busy day), raced across the street trowel and plants in hand, and plugged them in wherever I felt they worked best. So, in that way, little by little and over and over, the garden was planted. Time, attention, and the weather will determine how it turns out this spring. 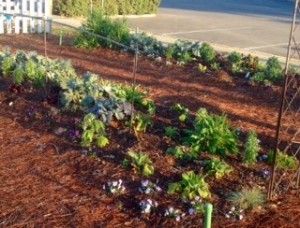 I began by planting a few foxglove, delphinium, and bachelor buttons under the still blooming summer tithonia. Then, when it was finally pulled out (Better late than never too!), pansies, violas, and sweet alyssum were added to large spaces that opened up. 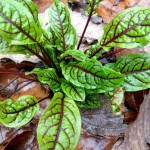 Since the summer annuals were pulled out of them first, the two front beds were planted the earliest with snapdragons, poppies, bachelor buttons, chard, curly parsley, dill (The dill will eventually freeze at some point.),  red veined sorrel, ‘Bull’s Blood‘ beets, kale, and mustard “Red Giant“.  There’s quite a mix of annuals, herbs, flowers, and even bulbs (dwarf narcissus and ipheion) in each bed. 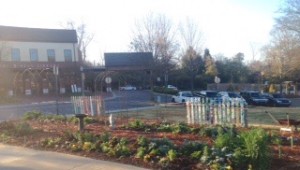 The ‘better late than never garden’ in mid-December…

A good layer of mulch is really important for your winter garden. Some folks start with a completely empty bed, add the mulch, then plant through it, a great method and easy to do. Of course,  I did just the opposite. I had the time to plant before I had the help for the mulch! So, inevitably, there I was, mulching in the dark before the first cold snap of the season.

I also made sure everything was watered well before spreading the shredded pine bark around the little plants. There will be many more cold snaps before the winter is through, and I’m counting on this mulch to keep the soil warm since this isn’t a garden that gets babied. 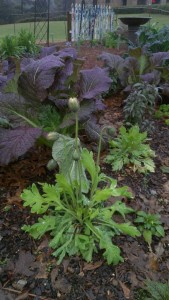 A poppy, in bud, with ‘Red Giant’ ornamental mustard in the ‘better late than never garden’ in January…

For people that don’t have big blocks of time (That’s most of us, I think.), planting a little bit at a time does work…obviously I’m a poster child for it. Now I’m concentrating on keeping winter weeds controlled in the beds, since the two worst offenders, chickweed and henbit, insist on coming up. Don’t let these winter weeds get hold in your garden. Pulling a few every week is far more preferable than tackling them come spring, after they’ve been allowed to smother your pansies and  violas.

Have you planted some flowers for spring? If you haven’t, try a few poppies, pansies, or violas since, as you know now, it’s never too late to plant a garden. I’ll keep you posted on our ‘better late than never’ garden’s progress too! 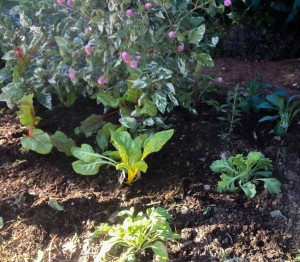 Chard and poppies mingling with pink gomphrena and the variegated hibiscus…

The owner of Oak Street Garden Shop, Billy Angell, and I have different approaches to gardening, mostly the result of our personalities, I think. Billy is very methodical and precise (not a bad thing), and I’m admittedly more undisciplined and haphazard in my gardening efforts.

I can almost feel him cringing as I yank just some of the  zinnias and other spent plants from the “better late than never” garden the other morning, rather than pulling everything out and starting  fresh with a completely new planting.  I’d gone in earlier than usual to take a look and assess what needed to be pulled out in anticipation of the fall/winter garden. I’ve been worrying that 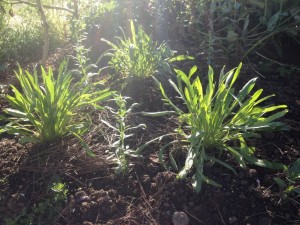 as we get busier and busier with the fall planting season, not to mention the craziness of the holidays just around the corner, the garden could fall by the wayside; so the pressure is on!

Now, it wasn’t strictly just a pull some of the plants out mission. I had also brought a smattering of plants with me to plant here and there as holes conveniently opened up. A few iceland poppies, some snapdragons, bachelor buttons, foxglove, red mustard, chard, and  kale were all on my to-do list to plant.  Now, how all this mish-mash is going to turn out is anyone’s guess, since I’m not starting with a completely blank slate…but that’s half the fun! 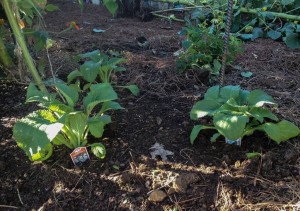 This is how I’ve gardened at home for years. In the fall, I pull out spent flowering annuals a little at a time; and, as I do,  I add to the garden as holes open up. This works out well because not everything I want is available all at once, and the garden turns over to a new season gradually as summer annuals mingle with fresh plantings.

This year bachelor buttons, foxglove, and iceland poppies appeared in late September; so they’ve gone  into the first available spaces in the garden. More of them will be planted as room opens up. Summer annuals that are still hanging in are left to continue attracting late season butterflies and bees until the last will finally be pulled out to make way for the final winter plantings of pansies, violas, and, by seed, larkspur and delphinium. This planting method works well in beds that are a mix of perennials, annuals, and shrubs, too. 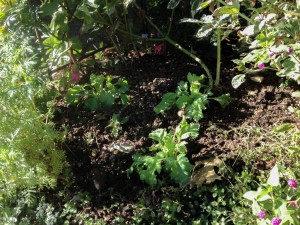 So, in the “better late than never garden”, the zinnias, cleome, and the few sunflowers I pull out (There are a lot more sunflowers to go!) make room for a few of each of the aforementioned snapdragons, iceland poppies, foxglove, bachelor buttons, kale, and mustard.  We’ll top dress the beds with PlantTone too and will see how the compost is looking in the bins, adding some of it if it’s ready.

In the coming days and weeks the garden will undergo even more changes until, finally, the last plants are in. Then it’s a waiting game until spring, when the real show will begin. Just don’t be surprised if you see us still planting in the dead of winter…I think the “better late than never” garden will always be just that!