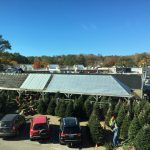 There hasn’t been much time to write lately, so with this post I hope to catch you up with a bit of what’s been going on at Oak Street Garden Shop.

The day before Thanksgiving the first truckload of Fraser fir Christmas trees arrived, and all hands were on deck to unload and begin setting them up for sale, pick-up, or delivery. 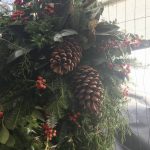 This year the trees (As usual!) were beautiful and full, and they disappeared quickly. Because Thanksgiving was early this year, many wanted to select their tree and begin decorating. We were ready and had the goods!

The trees, wreaths, garlands, and other outdoor decorating staples are the first things people want as they begin to ready their homes for the holidays.

It’s a predictable progression of decorating, beginning outside and then moving inside. Our greenhouse flowers and arrangements are in high demand through 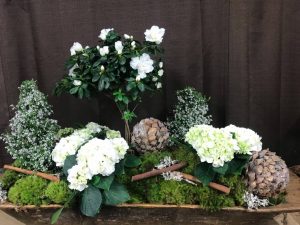 the middle of the month, and we make sure to have enough of the most beautiful flowers and greenery to work with. 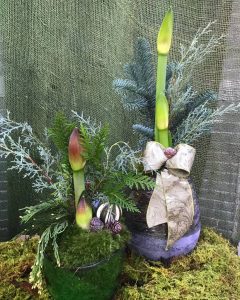 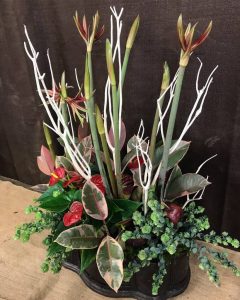 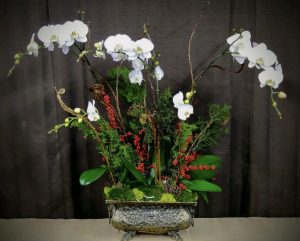 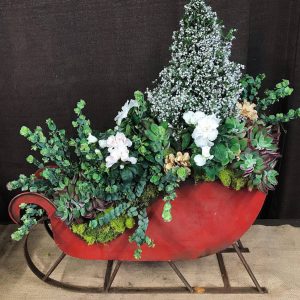 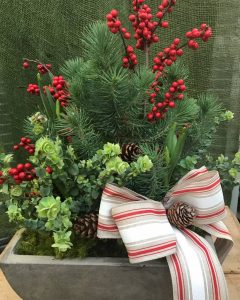 Gifts and centerpieces come last, and we enjoy creating custom pieces for people, either with our containers or theirs. 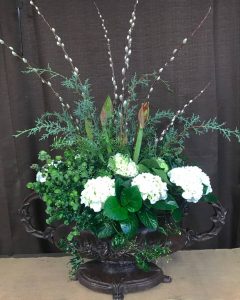 This post shows some of our work, but if you’re in the area and would like to see what we’re up to, stop in, as our work area is right up front. 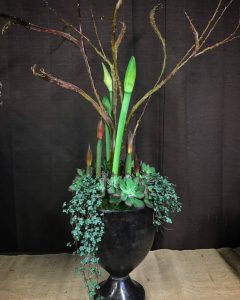 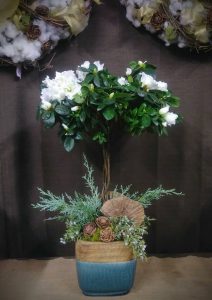 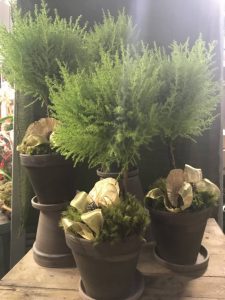 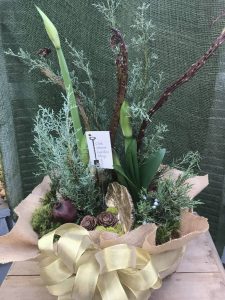 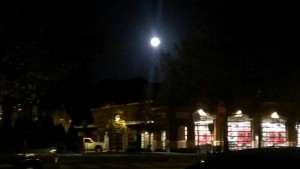 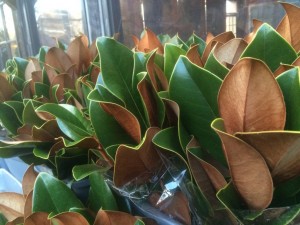 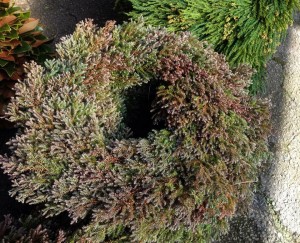 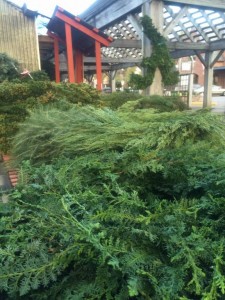 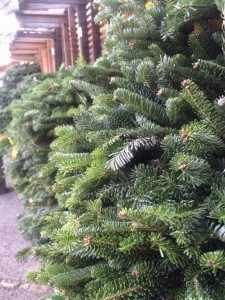 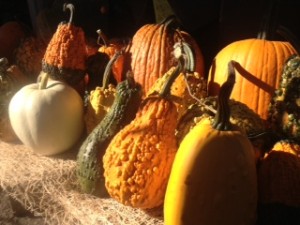 Just when you think summer’s heat won’t ever let up, along come a few days of cooler temperatures and clear blue skies to lift spirits and give all of us a second wind. 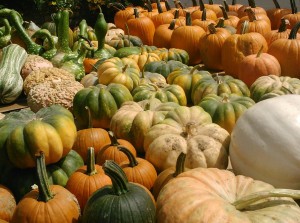 So many different pumpkins!

Summer’s final gift to us is the bounty of the late season garden – pumpkins! Oh, but not just any old pumpkins (Though we wouldn’t ever put down the good old fashioned jack-o-lantern!). The last few years the ubiquitous orange pumpkin has made some fancy friends, with names like Blue Hubbard, Cinderella, Long Island Cheese, Jharadale, Lumina, Lunch Ladies (Yes, really!) and Warty – just to name a few.
But, really the names don’t matter, because what’s in a name when they’re all so wonderfully different? 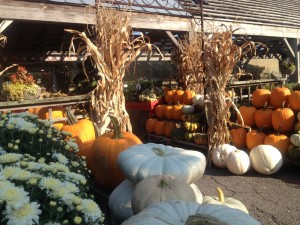 The entrance is looking so pretty!

The entrance to the shop will be filled with the pick of the crop – picked just prior to delivery from a 20 acre farm in Tennessee. We’re excited about the fall harvest this year and hope you’re making plans for pretty fall displays at your homes too!

Making an appearance this year, among the pumpkins, fall flowers and cool season vegetables, are our original handmade Halloween friends from many years past. They include gremlins, ghosts, a big orange pumpkin, a black cat and a scary old witch with her cauldron. It’s fun having them back!  A big thank you to Jamie, Molly and Pinkie for their fantastic makeover work on all of them – they look better than ever! 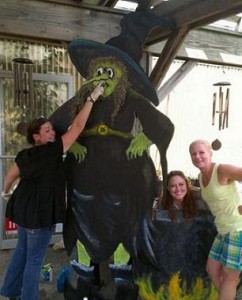 Molly, Jamie and Pinkie with our witch! 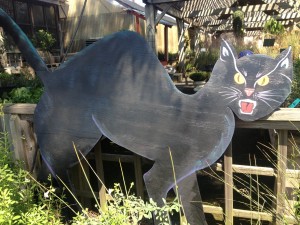 Pumpkins and Halloween decorations are ready made backdrops for pictures, too. So make yourself at home, and take as many photos as you’d like of your little “pumpkins” with ours! 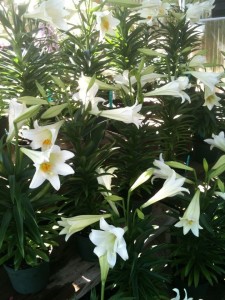 We love the colors, blooms and scents of the Easter holiday…from pure white Easter lilies to the soft purples and pinks of hydrangeas, and the fragrance of stephanotis…this season speaks of new beginnings..

With the upcoming holiday and family and friends gathering for Easter, we have the plants, flowers and arrangements for your table or gifts for loved ones at this special time.

Easter lilies are the traditional Easter plant – enjoy their blooms and scent, and if you have a spot in the garden, plant your lily as soon as danger of frost is past. (Easter is late this year, but please wait until at least the end of April to early May to plant your lily outside.) 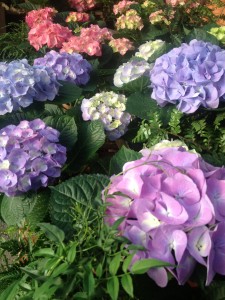 hydrangeas in the colors of Easter…

We also have beautiful hydrangeas…while these are considered florist hydrangeas, for you folks that want to try planting them out in your landscape find a spot with filtered sun, rich soil and a bit of protection. Keep them well watered their first summer in the ground.

The fragrant stephanotis wreaths are beautiful annual vines…they will bloom now and sporadically through the summer – they’re very nice in planters with other blooming summer annuals. They aren’t winter hardy though, so if you’d like to keep them be sure to bring them in for the winter. 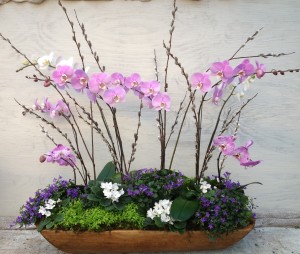 Pastel pink orchids float above campanula, violets and selaginella in this Easter arrangement

Of course we also have long lasting and elegant orchids – let us arrange a grouping in one of your containers or ours. In addition to gorgeous orchids we also offer kalanchoes, violets, freesia, campanula, calla lilies and more! 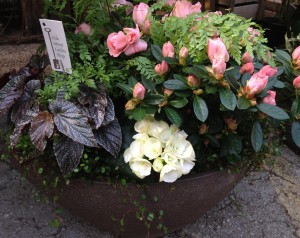 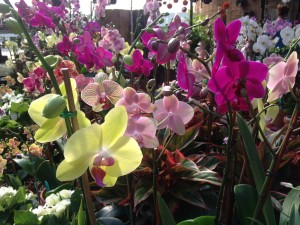 We always have the most beautiful orchids!

If you’d rather have an Easter arrangement or basket made up of plants that you can use later in your garden and seasonal planters, we have that as well! Just let us know and we’ll offer appropriate suggestions for you.

From all of us, we hope all of you have a wonderful Easter ! 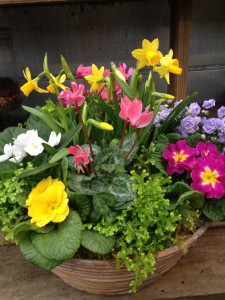 This pretty winter basket was a gift delivered to one of our customers on a dreary day in January. We hope it made them smile!

The happy flowers in this arrangement include tete a tete narcissus, cyclamen, primroses and blue campanula, blooming plants that are readily available in January and February.

Come in and put your own arrangement together or take a pot of primrose to a neighbor and make them smile too! 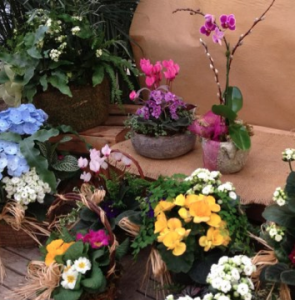 It’s almost February and that means Valentine’s Day is just about two weeks away! We have lots of live arrangements that will last far longer than cut flowers. Or you can choose something from the variety of flowering plants that we have in the greenhouse and we’ll dress it up for you! Let us know what you need now so we can have it ready for you when you need it! And have a Happy Valentine’s Day!