Because of the threat of downy mildew on impatiens, this year has seen all of us having to rethink what to plant in our shady beds and planters. In an earlier post  I explained what downy mildew is and offered some alternatives. After planting these pots (located in a very shady spot in front of Chez Fonfon downtown), I thought they offered a good example of a planting that utilizes different foliage and blooming options.

Owners Frank and Pardis Stitt prefer white and green for the front of this  French cafe, located next to their acclaimed restaurant Highlands in downtown Birmingham. These are fairly large, tan colored  cast stone planters  with nice clean lines.  A mix of contrasting green and variegated foliage with a touch of white add light to this shady spot,  and the stone wall adds a pleasing backdrop to the planting.

The photos shown here were taken right after planting, so you can imagine how much they will grow up, out and over the planters. By the end of the season they should be quite lush…and the folks at Chez Fonfon do a great job maintaining them.

The cast iron plant, aspidistra, stays in these planters year-round and is the backbone of this planting. Occasionally in the spring  it needs to be pulled out and thinned; at the same time any damaged leaves from winter are cut off. Once that is done, the planters are topped off with fresh potting soil, Osmocote is mixed in,  and they’re ready to plant. 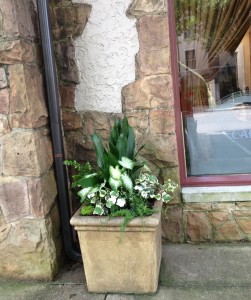 I started with the ‘Aaron’ caladiums first. (These will work in full sun as well!) The white center on the leaf really brightens this planting and is the direct opposite of the Algerian ivy leaf with its green center and white outline…foliage is so fun to work with! The tiny needlepoint like ivy is a big contrast – a much smaller and darker green leaf than the first two. Difficult to see, but, right up against the aspidistra, I added a blue-green grass-like juncus – it picks up the gray-green color in the Algerian ivy. 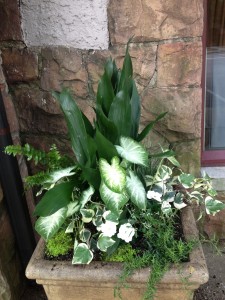 Next, the blooms – white New Guinea impatiens (These and the Sunpatiens are NOT affected by the downy mildew disease.) and some Euphorbia ‘Silver Fog’ to brighten this spot even more. The euphorbia is difficult to see in these photos, but it is a very nice filler for sunny spots too – I’m hoping it will get just enough light to bloom well and add its airy texture to this composition.

Last, a bit of the tiny, low growing baby tears – a lighter green to brighten the very lowest level of the planting, next to the dark green ivy. Eventually this will get engulfed by the rest, but until then it will be another lighter green in the mix…

So…no impatiens? No problem!  Want to see another example? Take a look at this massive moss hanging basket – it’s planted all for shade too!