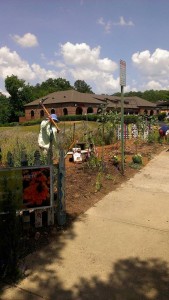 The pretty but very shy bright yellow goldfinches that have found the ‘Better Late Than Never’ Pollinator Garden across from the shop were still coming to the last of the bachelor buttons, larkspur, and some sunflowers that had seeded from last year’s plants when Bert and I began prepping the four beds for a new season mid-June. 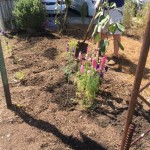 So, rather than pull every bachelor button and larkspur out to make way for new, I left what had been the prettiest colors of both, including a lovely lavender larkspur. Who knows, maybe some seeds of it will return in next year’s spring garden… 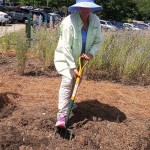 The beds needed some additional organic matter, and we added bag after bag of topsoil, soil conditioner, and PlantTone to each. 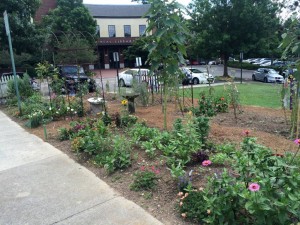 Bert and I took turns with my heavy pick axe, each strike of the tool working the amendments in without turning the soil, since that would only turn up buried weed seeds to the light where they’d happily germinate and grow. Then I took a garden fork and loosened it even more.

Any good garden begins with this all important work. Remember this in your own and always add more  to your soil before replanting for the new season. We usually have bags of soil conditioner and topsoil in stock, and the PlantTone is a great organic amendment that adds nutrients too. 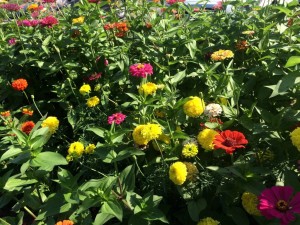 Finally the beds were ready for planting. After raking the beds smooth, it was time to sow the zinnia seeds in the two front beds. I also added lots of plants. 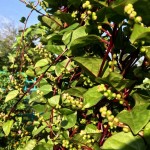 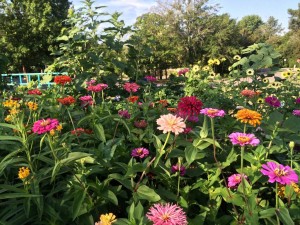 Tall cutting marigolds from a small grower north of Birmingham, tall purple and red gomphrena, a beautiful deep purple salvia and peach porterweed for the hummingbirds, angelonia, pentas, purslane, ornamental okra just for fun, pink mandevilla and malabar spinach vines on the two arbors, as well as seeds of moonvine and hyacinth bean to climb them too.

A few weeks later the last of the bachelor buttons and larkspur were pulled out, and the back two beds were planted with lots of sunflowers and tithonia, the orange flower the monarchs loved last year.   I noticed that a yellow lantana and perennial butterflyweed  had come back from last year also. 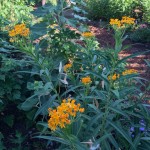 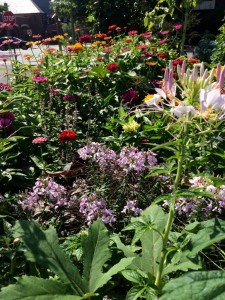 Of course the old fashioned Cleome, or spiderflower, had reseeded, but I also added another, shorter variety and a few more perennials this year, including coneflowers and caryopteris on each corner of the two back beds. 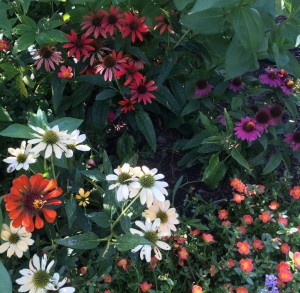 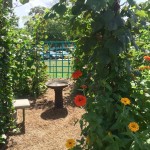 Just as plantings change and evolve with the years, so do structures in the garden. Pinkie painted the back fencing white this year, and we added a trellis piece painted a beautiful blue. I think we should try to grow sweet peas on it this fall, though I’ll have to tie string onto it for them to climb on.

The days have passed. It’s now August and the true heat has settled in; the zinnias love it and are in a riot of bloom: California Giants, Cactus, Peppermint Stripe, Northern Lights – beauties every one. 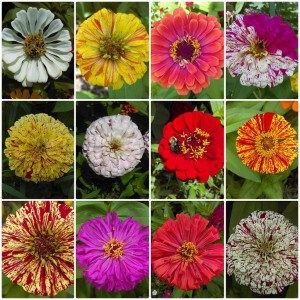 Watering, pulling stray weeds, and deadheading are the important chores on hot summer days, but sometimes I have to stop and simply watch. I see tiny skipper butterflies, bees, and even a garden spider weaving its web near the arbor and bench. 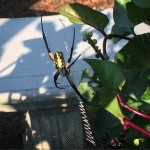 The sunflowers and tithonia will be blooming soon. They were planted a few weeks after the zinnias. I look forward to these towering bee and goldfinch magnets, in every color from pale yellow to deep red, and the brilliant orange flowers of the tithonia too. And, just the other day I threw out some seed of tall yellow cosmos, another butterfly flower. 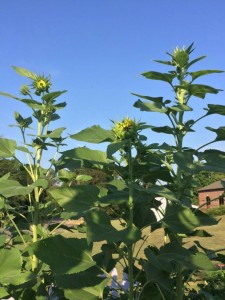 The garden will reach its exuberant crescendo in the coming month before beginning a slow descent into fall. The zinnias will most certainly get mildewed leaves, and the heavy sunflower seed heads will droop on sturdy stems. But for now, it’s summer, and the garden is glorious.