We’ve been creating some magic with the  lichen-covered branches and large limbs Jamie has brought in lately (They are a found treasure from an old and dying oak tree in her aunt’s yard.), and here is our latest project – giving new life to a dying tree.

The key components are some really large limbs, swiss cheese philos that were too rootbound to remain in their plastic pots, air plants, bromeliads, and lots of helping hands!

First, a large, lightweight fiberglass pot was put in just the right spot in the greenhouse, and, with much maneuvering,  the positioning and wiring together of the 3 large lichen-covered tree limbs was accomplished. Next, we decided it needed some pea gravel to weigh it down, then added potting soil on top so the swiss cheese philodendrons would have lots of room to grow. Now we were set to play. 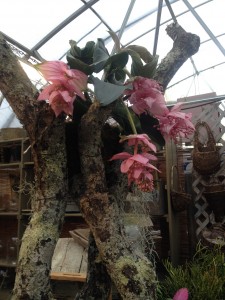 Jamie planted the philos in the large pot and glued more lichen to the cut ends of the branches while Pinkie fashioned a planting “basket” of plastic coated chicken wire, lined with moss,  that the medinilla magnifica would live in.  In their native habitat in the Phillipines, medinillas are found high in trees, so nestled high in the crook of these limbs seemed a natural spot for it here. 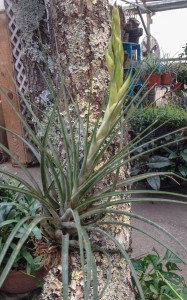 One of the air plants wired on… 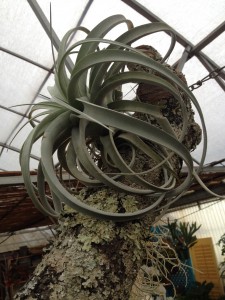 While Pinkie planted the medinilla,  Jamie and I played with the positioning and wiring of the larger air plants and small bromeliad. It was coming together!

Finally, a bright Neoregelia bromeliad with a moss wrapped pot was nestled in at the botttom for a pop of color at the base. A bit of spanish moss hanging delicately from the top limbs completed our project.

If you are in the area, come by to see our latest creation. We think it will be another fixture of the greenhouse…and one that may change with the seasons or our whims!