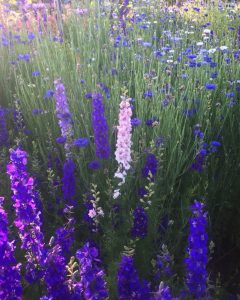 Village Living, our neighborhood newspaper, did a nice story on pollinator gardening that ran in an April issue. It was a very good and informative article, but I fretted that the picture was of me weeding, and not very exciting. What a difference a month makes!

The bachelor buttons are putting on their annual show, tough plants that come back year after year to dazzle with their varied shades of blue, lavender, pink, and white flowers. I throw out more seed each January (I’m too busy during the holidays to sow it any earlier.) of select blooms from the previous year’s garden.

I’m pleased with the larkspur this year and marvel how it is a constant now, though I add more seed of it as well, not quite trusting that it will reappear each year. In May, on a warm morning, I walk through the small space, marveling at the abundance of bloom. 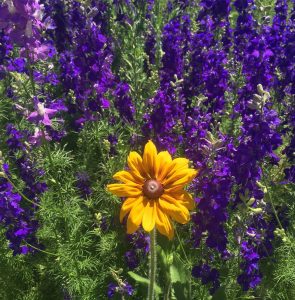 The  ‘Indian Summer’ rudbeckia (Black-eyed Susan’s) have returned and are blooming. This is exciting, as I wasn’t sure if they’d be cold hardy in this open area. They’ve not only returned, but have sown themselves in another spot as well. Excellent, I think. 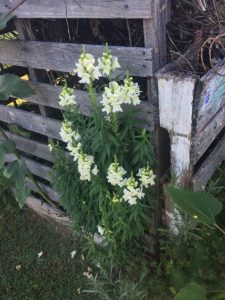 I move on, strolling around the corner of the back bed beside the compost bin. There’s a verbena blooming that I didn’t plant – I’d noticed it for the first time last year, and here it is again, a lovely lavender flower carpeting the ground beneath the blooming bachelor buttons.

I glance to my right and see a white snapdragon, clinging to the edge of the compost bin, a virtual annual espalier, only surviving the city worker’s weedeaters by hugging the weathered wood. We’re having to take the old compost bin out, it’s looking pretty ramshackle, and folks are beginning to throw trash in it.  So many survivors have seeded themselves around it, and I’ll miss the surprises it offered. 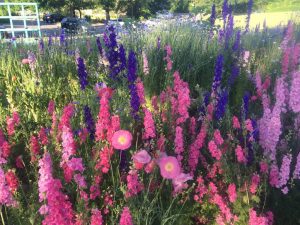 I know that soon the onslaught of heat will be too much for these winter beauties and they’ll begin to flag.  I already see signs of summer’s encroachment; sunflowers and zinnias have sprouted and grown from dormant seeds that have taken advantage of spring sun and warm soil.

I stroll and strive to savor every moment.  Motionless, I watch honeybees move from poppy to poppy, blurring my eyes to better see the morning sun shining through the beds of blue and pink. Gardens are transient and I know in another month (because this garden is  “better late than never”) when the seeds for the summer garden are finally sown, this early morning vision will be a distant, beautiful memory. 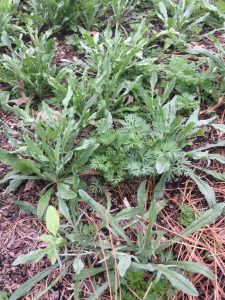 The past week we had two nights below freezing, and I wondered how the ‘Better Late Than Never’ Garden would fare across the street from the shop. I’d been checking it regularly, hand weeding the henbit. This pesky weed (Did you know it’s edible?) was determined to come up between the ferny larkspur, flat poppy leaves, and the blue gray foliage of bachelor buttons that looked like they were just beginning to stretch up toward the sky. 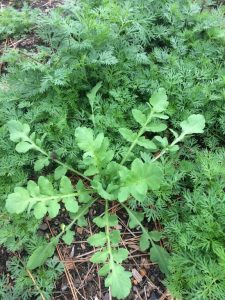 This garden is truly a stepchild of the garden world. I was out of town the day the temperatures were forecast to drop. I knew everyone at the shop was moving the inventory into the greenhouse – a big job and one that I’m sure would take a good part of the day. I let the garden go, hoping for the best. 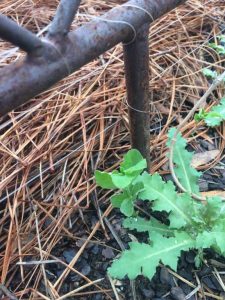 With the first cursory glance as I parked my car across from Emmet O’Neal Library and walked up the sidewalk toward the garden,, everything still looked green, a very good sign. Looking more closely, the only damage appeared to be to the few sunflower seedlings that obviously didn’t get the memo that it was much too early to sprout, and were now black and quite dead.

Maybe the fact that I didn’t thin the crowded seedlings out like you’re supposed to kept everything warm, snuggled up together, I thought. Whatever the reason, it was good to spot even the sweet peas that I’d recently planted on one of the front arbors. I was looking forward to seeing them begin to climb up the fishing line I’d strung along the metal of the support.

I’m hoping some of the poppies coming up near the arbor in the front beds are the gifted seeds from a friend. She was given them on a garden tour to Maryland last spring and offered them to me to try, saying the color was exquisite. I can’t wait to see! 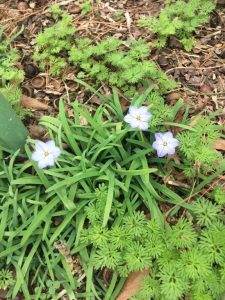 Though there are always sights like that to look forward to,  many large flowering shrubs and trees in our landscapes may well have been affected by the last cold spell, their buds frozen. One of my gardening friends mentioned she was particularly worried about her summer blooming hydrangeas, and I’m concerned about my fringe tree blooms.

Only time will tell, and we’ll just have to keep our fingers crossed. Until then, enjoy the beauty apparent in the fresh green hue of unfurling leaves and the return of the many  pollinators that grace our gardens and landscapes. Be prepared also to plant the  flowers, herbs and perennials that they appreciate…and that we do as well. Happy gardening!

I’ll be honest, my hopes for a beautiful spring show in the ‘Better Late Than Never’ garden weren’t that great. Weather and time last fall seemed to conspire against me – no beautiful transplants of pansies, snapdragons, or foxgloves were put in the little plot across the street, even as everyone else was planning and planting their home gardens September through December. The summer garden went to seed and was finally pulled out with Ben’s help, in November.

Sometimes, though, nature helps us along. Walking to my car at the end of early winter days I’d glance at the garden, its four beds seemingly lifeless plots of earth. If I had time I’d walk through, looking to see if any seedlings were emerging. There were, zinnias and sunflowers mostly, seeds dropped from fading blooms,  germinating in the still warm soil. But I knew these were destined to freeze in the upcoming winter chill. Oh well, I thought, maybe I can get something in after the holidays. 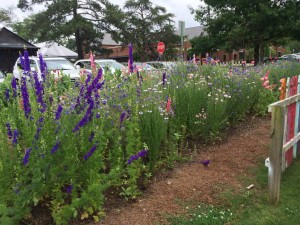 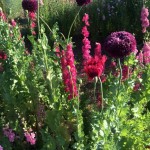 The weeks of late summer through fall had passed quickly. We held Molly’s wedding at the shop, and autumn plants and loads of pumpkins arrived and went. The days flew by during the frenetic holiday season that ended as suddenly as it started. January, and a new year,  had arrived.

I finally had more time to concentrate on the little garden across the street with the apt name. I’d noticed,  on the few December days I had a moment to look,  that there were tiny bachelor button plants everywhere in 3 of the beds. I couldn’t do more than try to thin them out, though, with what little time I had.

They’d  bloomed in the garden the spring prior and had most definitely reseeded, but with barely any thinning were carpeting 3 of the beds quite thickly. I watched them fill in with some alarm. Would they smother themselves out because they were too close together? I decided to let well enough be and see what would happen. 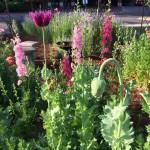 Spotting  that bit of growth in the garden energized me. Even as the bachelor buttons were putting on their amazing growth spurt through January and February, I was tossing out seeds of larkspur in all shades.

I’d choose a few Botanical Interests seed packets off the rack, larkspur in shades of blue or mixes of blues, pinks, and whites. Eyeing the beds, I imagined perfect color combinations, letting the seed slip through my fingers onto the uneven soil. 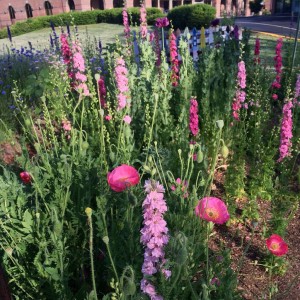 I scanned the garden each morning, hoping to see some spots of green. Impatient, I would scatter more seeds – packets of sweet alyssum, oriental poppies, mixed colors of larkspur – willing an abundance of  flowers for spring. 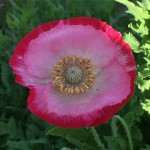 Finally I saw the ferny foliage of the larkspur here and there between the crowded bachelor buttons and the distinctive blue-green foliage of the oriental poppies appeared too.

Each day as the plants grew, more and more people asked what was growing in the garden. I’d explain, smiling, about plants  reseeding and seeds thrown onto the ground on cold winters days. Most people looked incredulous. From seed? Yes, I’d answer, seeds, and a prayer for spring.