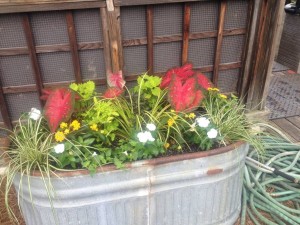 The troughs in front of Dyron’s Restaurant took a real hit this winter, so I was more than happy to pull out all that had died and replant for the summer.

Last year’s planting included a pretty yellow thryallis,  but this year I opted to leave it out. I did repeat the ‘Red Flash’ caladiums that had done so well last year and left the Carex ‘Evergold’ and Golden Acorus in each trough as well since they had sailed through the winter cold. Keeping  some perennials in planters as large as these makes sense.

This year, instead of zinnias, I opted for vinca and lantana for some white and yellow blooms respectively. They should definitely take the hot blazing afternoon sun. A dark leaf potato vine will trail over the edge, and its color should contrast nicely with these containers.

Last summer the Red Flash caladium almost overwhelmed the thryallis, so this year I decided to give them a run for their money and added a chartreuse coleus called ‘Wasabi’ that will get just as enormous. Here’s to another growing season!

Maintenance of this planting will involve consistent watering and the occasional clip back of the lantana and coleus. Seed pods that form on the caladiums will also be cut and any yellow leaves removed.