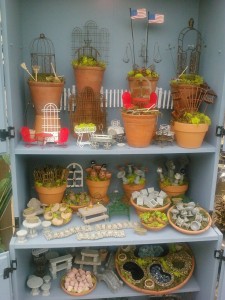 For all of you miniature garden folks (You know who you are!), some new tiny accessories came in recently that might be of interest if you want to rework one you already have. Some of you may want to create more of them or you may have children and grandchildren that love these tiny worlds as much as we do! We even have a gentleman who comes in on a regular basis whose hobby is creating tiny train worlds. He’s always on the lookout for new pieces and plants to add to his extensive train villages. 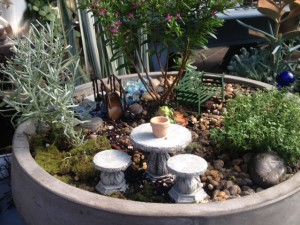 If you’re going to the Hand In Paw fundraiser this month, you’ll also see one of our miniature garden creations there – it will be in the silent auction. Here’s hoping it does its part to raise needed funds for that worthy organization! 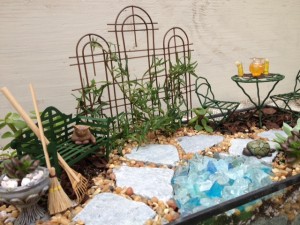 Some people have asked why we don’t carry fairies and other inhabitants for our miniature gardens. For us, the garden is the key – creating a miniature garden world with plants that actually will grow for you…along with some judicious clipping when needed.   (Fairies are there in spirit, not seen, and, if the garden has the magic of the creator’s touch, of course they’ll come.) 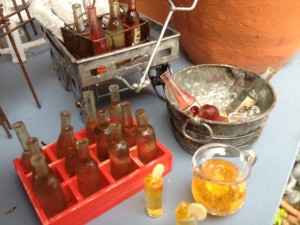 These miniature gardens have really struck a chord for adults and kids alike, and it’s so much fun to see the delight by adults and excitement of little ones as they browse (and play with)  the tiny creations that can  be used in their own gardens. Of course, any activity that stimulates imagination is certainly worthwhile!  For children, it’s a make believe world; for adults it’s an outlet to grow plants in a different way.

A customer came in one day to ask for help reworking  her daughter’s miniature garden… according to the parent, her little girl absolutely loved this garden, which had been a present.  This one had a winding  pea gravel path and stone “courtyard”  (which she would smooth with her tiny rake each day), rock “boulders”, a bench, and other little accessories as well as  a few sedums for the garden plants. 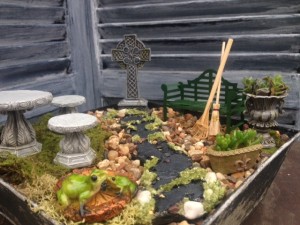 All was well until the night the little girl had a sleepover party with a couple of her friends…you might well imagine where this story is going! Somehow the miniature garden, which she kept in her bedroom, was completely up-ended  in the middle of the bed, an utter mishmash of soil, plants,pea gravel, stones and little accessories. It must have been like Humpty Dumpty falling off the wall in the fairytale! We helped rework the little miniature garden, and hopefully that little girl is still happily raking her pea gravel “path”… 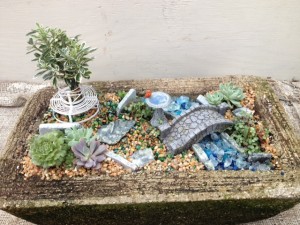 Not long ago a parent, her daughter, and the girl’s little brother came in. The mother marched to the counter with the little boy and said that he needed to buy, with his own money, a stone for his sister’s miniature garden. Puzzled, I asked what kind of stone he needed. Well, the mother said, her daughter had a stone with the words “My Garden” written on it in her miniature garden. Evidently the little boy had turned it around and scrawled  “bathroom” on the back! Of course, the boy’s sister wasn’t having any of that in her garden. So, we found the perfect stone, wrote “My Garden” on it for the little girl, and the little boy brought out his money to pay for it.  Before they left, the mother gave the little boy the stone that he’d written on. Much  later we found it hidden in the miniature garden displays and had a good laugh….he didn’t want it either! 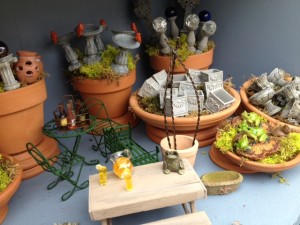 Some of the fun things we’ve gotten in recently include a pair of ghosts (It’s never too early to begin thinking about Halloween!), wooden soda bottle crates with soda bottles, a wine basket with wine bottles, a metal tub (just right to put the wine and soda bottles in!), tiny turtles, frogs and one very fat cat, some pretty urns, a very realistic Celtic cross, a stone walking bridge, a triple trellis  and more. And there will be additional miniature garden items coming in down the road too. It’s a good idea to pop in every now and then to see what’s new.

The miniature gardens shown in this post showcase a few new things, as well as some items we’ve had. Mostly though, I hope they illustrate how much fun making these gardens can be, and how each one is a little different…imagination is a wonderful thing!