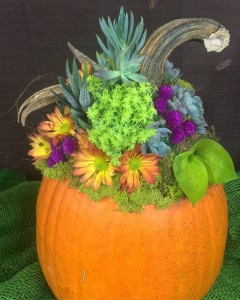 It all began with my Mother’s 85th birthday in early October. She has macular degeneration and would rather stay close to home now.

Since I am in Birmingham and she is in Wisconsin, unfortunately, with this a busy time in the garden shop business, getting together on her birthday doesn’t happen anymore.

But she is on Facebook. I decided a couple of years ago to get her a Nook that she could use to listen to audio books, thinking it would be a perfect way to open her world. It also allows her, through Facebook, to see pictures of the garden shop and my garden. It has been a joy for her, and I’m thrilled! 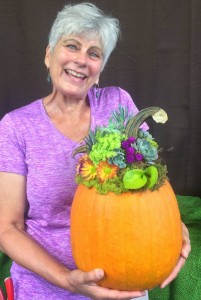 So, with this in mind, I decided to decorate a pumpkin for her birthday and put a picture of me holding it on her timeline as her birthday gift from me. I’d seen lots of pictures of succulents on pumpkins (more on that later), but I wanted something bright and happy from me to her on her milestone day. 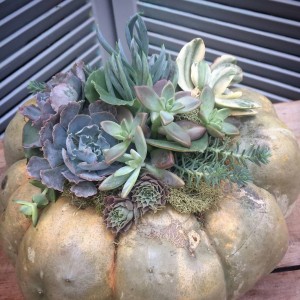 I chose a bright orange jack-o-lantern pumpkin, glued some cut flowers of gomphrena and mums to it along with a couple of okra pods, added  a few succulents, and tucked moss around the edge. I even cut a couple of tiny hosta leaves. Voila, the birthday pumpkin was born. 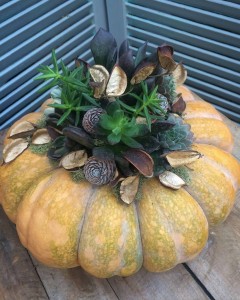 A few days later a customer came in with a picture of the aforementioned succulent topped pumpkins. They’ve been everywhere the last few years, in magazines and various places on line.

Easy to do but requiring lots of cut succulents, I’d stayed clear of getting into the making of them. I dutifully tried to emulate the white pumpkins in her picture with the succulents we had on hand. 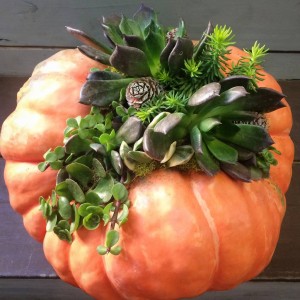 When they were finished, I set them on the display steps up front, where people could see them, and decided to make a few more. Here’s how they turned out. We had a few more orders that day as people saw them!

if you’d like to make a succulent topped pumpkin, choose a pumpkin and have fun! Any kind of moss can be used. I chose green sheet moss, gluing it to the top of the pumpkin. 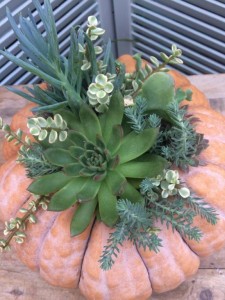 Purchase or take cuttings from succulents you might have growing in your garden or pots and simply glue them to the moss. Succulent experts advise misting the cuttings once a week.

It’s also fun to add other decorative elements like the okra pods I used on my Mom’s pumpkin. Try tiny pinecones, acorns, and more to add interest. It’s only limited by your imagination!

If you’re in the area, and would like us to decorate a pumpkin for you, stop in and place an order!