The plants here are actually more than just ground cover, that one size fits all word that describes  plants that spread and spread…(or at least we hope they will where we put them!) 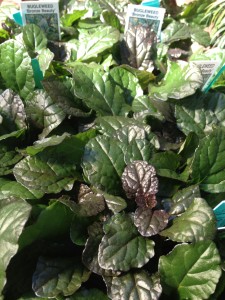 Ajuga – there are some great ones!

We say they’re more than just groundcover, because many are ornamental as well as being tough. There are many, many varieties of ajuga for example, some with dark, shiny leaves, others with the tiniest of leaves that work well in containers, still others have pink and cream variegation and blend well with annuals in mixed planters to add foliage color and texture. 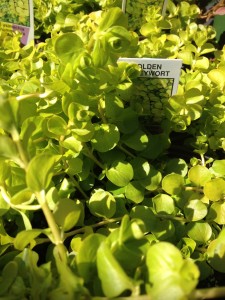 Golden creeping jenny is very much at home in moist areas where it will spread happily – combined with golden sweet flag (Acorus ‘Ogon’) it will light up the landscape…the acorus will need occasional division and a trimming in February (at the same time you cut mondo grass).

Creeping jenny is also a wonderful addition to planters as a trailing element…it will also tolerate sun if well watered. 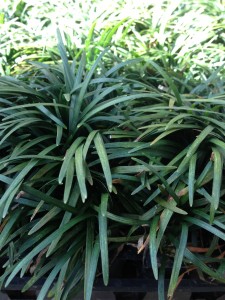 Dwarf mondo, a great substitute for grass in shady spots

Dwarf mondo is a tried and true groundcover useful as a grass substitute in shady areas. You’ll find that it is sold in 4″ pots, but when you plant, be sure to pull the sprigs apart and loosen the root system, it will establish much more quickly for you. 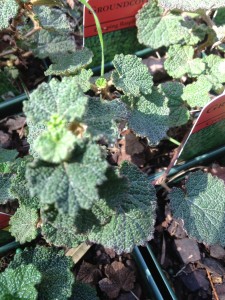 Another you may not be as familiar with is Rubus – creeping raspberry. This is an evergreen groundcover that spreads and roots along the stems as it grows. It can cover some tough territory, from areas under trees to rocky slopes. Once it establishes, it will spread quickly. The foliage turns a beautiful red/bronze color in the winter and it has insignificant white flowers in the spring (no raspberries though, darn!) 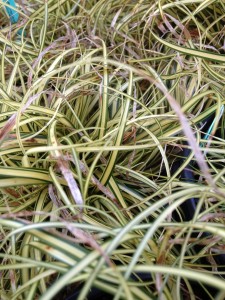 The Carex species are another grassy groundcover, really more clumping in habit but we include them here because they add such interest to the landscape. The one shown here is Carex ‘Evergold’ a variegated grass that really lights up shady spots and if used in a container fountains over the edge beautifully. As with the acorus, it benefits from a trimming in the spring. 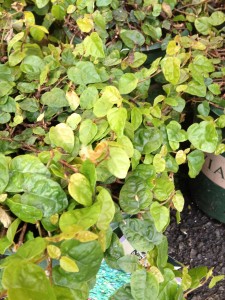 Many of you are familiar with creeping fig…we have plenty in stock now. It prefers a shady, moist spot but will adapt to sun if given adequate moisture.

Remember, all of these are also useful as components in planters, so even if you’re not in the market for a true groundcover, you may still want to take a look at these when you’re planning your summer pots too!