There are those rare instances when you feel like you’ve actually made an impact, however small, in someone’s life, and recently, near the end of a long, crazy, tiring day something happened that made me feel really good.

I asked a couple I saw looking at some plants in the shop if they needed help. They said no, that they were from Hattiesburg, Mississippi, and just walking through, adding everything was so beautiful and there was simply nothing like it where they were from. 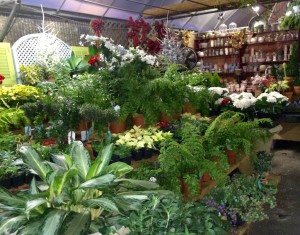 I asked them what brought them to Birmingham. The woman pulled her sweater aside and I caught a glimpse of a medical drainage bag. 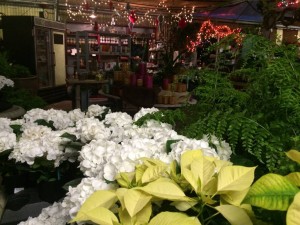 I’ve had a double mastectomy at UAB, she said, and we’ve been staying at an apartment here. We’re really hoping to be home for Christmas. I said I was glad they’d found our little shop and that I hoped they enjoyed looking around.

We chatted for a moment, then they asked where the cats were (They’d read the piece on the front door that Pinkie had written about Tacca and Liam.), saying they really missed their cats and dog and couldn’t wait to get back home to them. 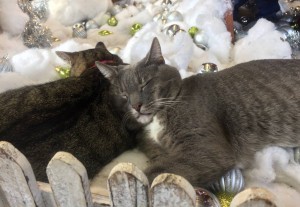 I showed them where the cats were sleeping in the Santa Claus display in the cushy “snow”, and they laughed at that as they were petting them. Her husband pulled out his phone to snap a shot of his wife with the cats, so  I asked if they’d like both their pictures taken with them. “Oh, that would be wonderful,” she said, “Thank you for taking the time.” 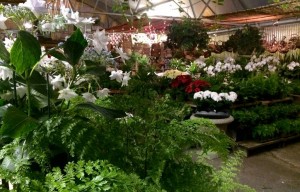 It’s funny. The day up to that point had been absolute, continuous bedlam, and we’d all been running in circles with hardly a breather in between. But it felt as though time slowed down as I walked around and talked with them. As they turned to go, they both grabbed my hands saying thank you, and bless you. I wished them the best and said, if they ever needed just to walk through, to come any time, that plants heal too. 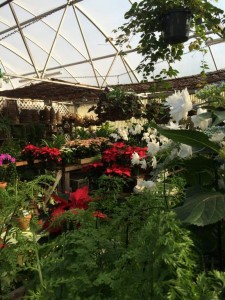 A chance encounter with two lovely people looking for healing may well be my best gift of the season; I can’t imagine any others that could even come close.