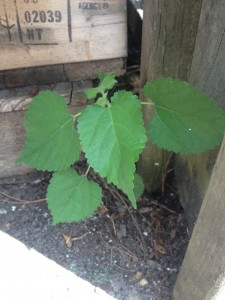 Mulberry weed, Fatuoua villosa, is a weed you definitely want to get rid of if you ever see it in your flower beds or any part of your landscape. Another common name is hairy crab weed – that doesn’t sound very pleasant does it? I cuss this weed out every time I see one (or more) in my garden…the main problem with this noxious weed is that it spreads by seed…and the seeds occur on very tiny plants. In my research, I keep finding that maintaining a 2″-4″ layer of mulch will help smother germinating seeds, and that pre and post emergent herbicides are very effective. Hower, because it grows so closely among desirable plants, using herbicides can be problematic, and not my favorite solution anyway. 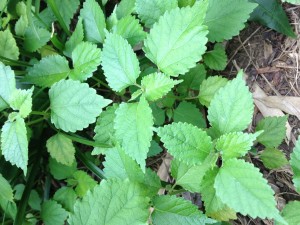 It”s native to East Asia, with a range including Japan, Korea, China, Taiwan, Tonkin, Okinawa and the Ryukyu Islands.  It was spotted in Louisiana in 1964 by J.W. Thieret, but it had been cited in New Orleans as early as 15 years before. If this is the case, it probably entered North America as early as the late 1940’s, possibly brought back by returning troops from World War II.  From there it’s suspected to have come into the Southeastern United States on nursery stock.

Since its introduction into the Southeast, it has been reported in states from Florida to Indiana, east of the Mississippi, including  Texas, north to Oklahoma, Arkansas, southern Missouri, Kentucky, Maryland and West Virginia. It has also been reported in California and Washington State out west, and in the eastern and lower Midwest in south-central Ohio and southern Michigan. 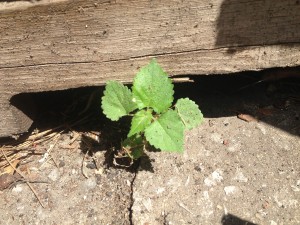 Listed as a noxious and invasive weed, it gets it’s common name because it looks similar to mulberry tree seedlings when they’re 4″ tall…but this herbaceous weed has a taproot and can grow 3′-4′ tall. You never, ever want them to get to that point though!!!!  It has purplish green flowers with no petals, and the seeds, which appear on it when it’s not even 2″ tall, are explosively discharged up to 4′ from the original plant. Because of this, there is never just one of this weed, but more likely, colonies of it. It’s easy to pull when young, but because it develops a taproot, it becomes more difficult to pull as the plant gets larger.  Be vigilant in eradicating this weed, and dispose of any that you hand pull into a trash bag immediately – don’t ever put it in your compost pile.