The large square planters outside chef Frank Stitt’s French bistro, Chez Fonfon, are my babies to plant each season, and it was interesting to see how things fared after a particularly harsh winter. Not surprisingly, even with the excellent maintenance their staff provides, it was time to redo for the summer heat. 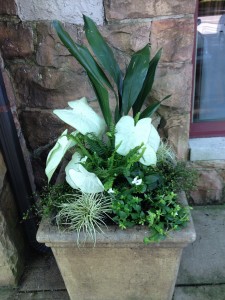 A testament to its common name of cast iron plant, the aspidistra looked amazingly good considering the bone-chilling temperatures Birmingham dipped to in January.  It only needed a few leaves cut out, and no thinning was required this season…probably due to the cold. A heuchera, that had been added in the winter planting for its beautiful leaves, was removed to be planted in a bed at another of the Stitt’s restaurants, Bottega.  I also removed the branches that had been added to give extra interest in the winter planting.

This year, instead of using the Aaron caladium of last summer, I switched it up and put in some caladiums that are all white, named ‘Garden White’. They should get quite large and work well with the kimberly queen fern, a tropical fern with an upright growth habit.  Next, a couple of white sunpatiens were placed. These will also add mass to the center of the planter and, with the trailing white torenia, add more color to this shady spot.

I love foliage in planters such as these, so I couldn’t resist using Carex ‘Evergold’ to spill over the edge, along with torenia and a pot of angelvine, muehlenbeckia complexa, a tough-as- nails little vine that will also trail. 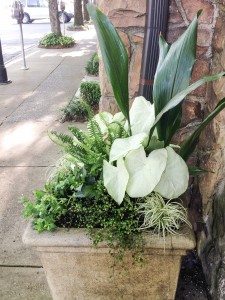 Torenia is an interesting plant, useful in shade plantings such as this. The white one used here (They are also available in blue, purple, magenta, and a yellow.) will trail over the edge of the planter, but there are also plants in this same genus that grow more upright and are useful in garden beds and planters in light shade as well. This is a good plant to get to know, since regular bedding plant impatiens are susceptible to downy mildew of impatiens.

So…another planting finished. The best part is yet to come, though, as patrons and passersby can watch the transformation of small plants as they gradually  grow together and flourish with  a little help from the capable staff of this fine Birmingham restaurant.