The old window had been kicking around for a few years, and we’d done a beautiful succulent planting in it. Bert had even built a planting box onto it so the plants would have more room to grow. It hung in the greenhouse for a few seasons and gave folks lots of ideas for their own vertical plantings. 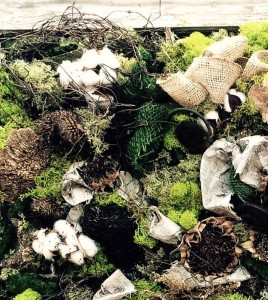 During a greenhouse spring makeover the window planting was taken down.  It was propped against a wall by the clay pots where  it sat all spring. Finally this summer it was emptied out since the planting looked a bit worse for wear by this point. 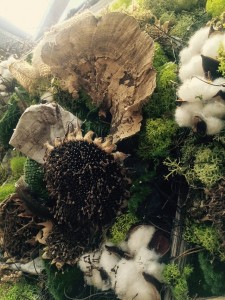 Some plants had done better than others. Those were repotted, the frame was completely emptied of soil,  and the bare frame and planting box stored behind the greenhouse.  I eyed it one hot summer day, and, having just seen some beautiful wall art …Was it on Instagram, Facebook or Pinterest? I can’t remember now. But the bug had bit me, and I decided to create a wall piece using dried plant material, twigs, fabric, anything textural I could find. I had a summer project!

The first pictures show this first window turned out. It took quite a bit of time, and materials including fabric, dried sunflower seed heads, cotton bolls, birch bark, and much more. Everything is hot glued to a base of fabric and burlap. It was quite the project! 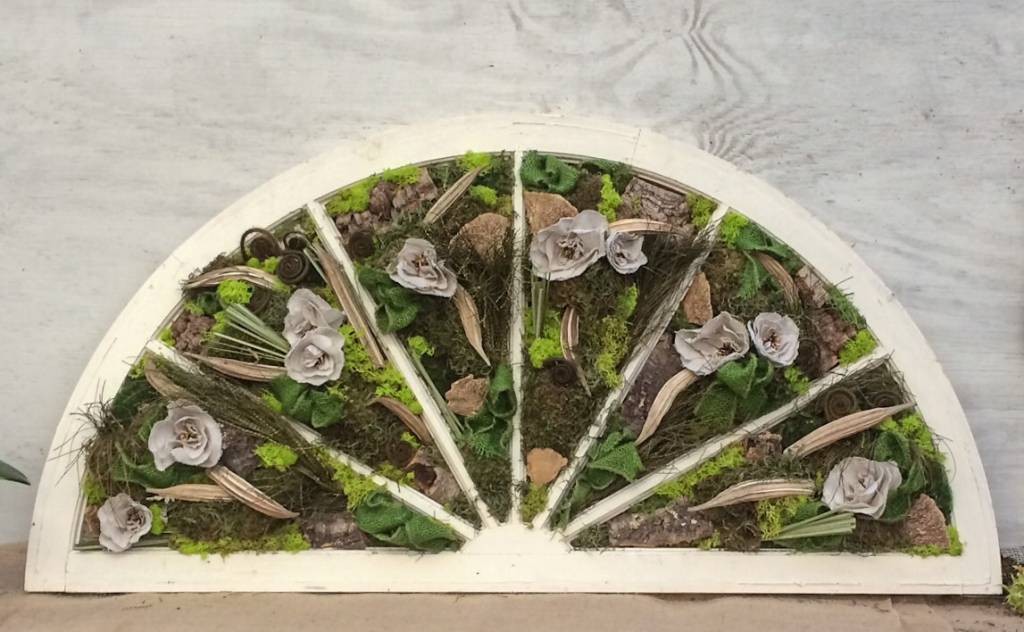 A few months later my friend from Studio By The Tracks, Ila Faye Miller, mentioned she had some old windows they didn’t want any more. Fresh off my last project, I said we’d love to have them. One in particular caught my eye, a half-round window, called a lunette. I’d had so much fun creating the last window art piece I’d decided I wanted to make another.

Back at the shop, each triangular pane of glass was removed, and a fresh coat of paint was applied to freshen the old window up. Pieces of burlap were stapled to the back, creating a base that the okra pods, cork bark and other textural pieces would be glued to. Many hours later it was finished. The old window had a new purpose.