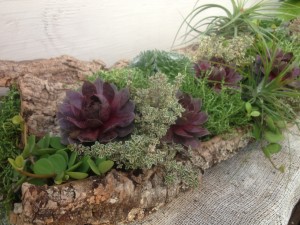 These cork bark pieces are so organic and natural…we love them and wanted to pass on just a couple of ideas for planting them. Actually, they were one of those happy accidents – one wrong stroke of the keyboard, with a different item number ordered than planned, and, voila, these cork bark pieces arrived the other day that were rounded, with just enough space for planting rather than being flat…oh, happy day!

You may see other possibilities for these bark planters that don’t involve plants at all…that’s fine too – we will have plenty in stock in the coming weeks and you can decide how they’d work best for you. They are affordable and fun for whatever use you choose to make of them. 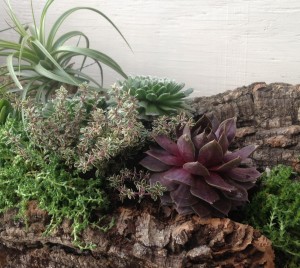 Of course, if you’ve been keeping up with previous posts, you know we’ve gotten in some pretty cool looking succulents, as well as air plants and the beginning of the new season’s herb offerings. So, with all this bounty to work with, one bark planter became a succulent, herb, airplant design and the other became a study in silvery grays and blues with a pop of chartreuse… 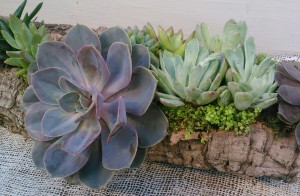 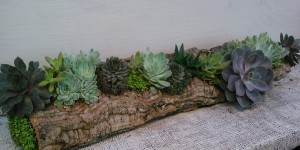 As with any combination planting,  look at color, texture and form of the plants you’re working with. The bark is rough and brown…in one planting the red coloring of the hens and chicks play off the brown of the planter while the red edging of the thyme also picks up the color of the succulents. The spiky air plants contrast with the rounded forms of  the rolled bark as well.

The silver succulents show nicely against the dark of the bark, and the repetition of the round forms is pleasing, almost like a river running along the piece…of course, succulents and some herbs are best for this type of shallow planting. 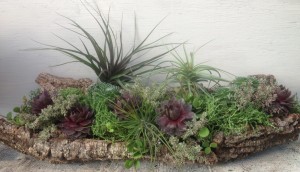 Strong morning sun with shade in the afternoon will be helpful in keeping these looking their best…We planted these with a light potting mix – water freely when dry but let dry completely between watering. We will be checking  the thyme more frequently and keeping  it clipped, and as plants outgrow the composition we’ll  pull them out and replace with new ones…fun!