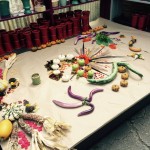 The first day of fall had come and gone, and, while we’d talked about doing a group project mandala design for each season, the days kept slipping away as days do. Our summer mandala had turned out to be so much fun for us, though, that we’d been looking forward to creating another one. Well, last Friday turned out to be The Day. 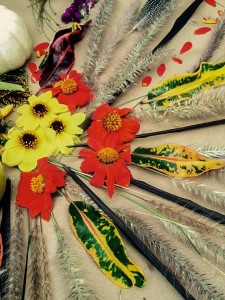 First of all, some of you may not be clear what a mandala is. By definition, a mandala is “any of various ritualistic geometric designs symbolic of the universe, used in Hinduism and Buddhism as an aid to meditation.” Another definition describes a mandala as “circular designs symbolizing the notion that life is never ending.” 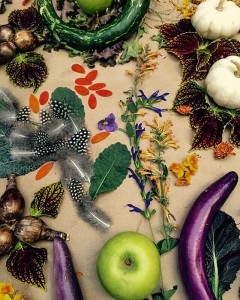 While ours may not conform completely to a strict definition, this is our version of a mandala, using fruits, vegetables, seeds, leaves, and blooms of each season.

I can see how studying a mandala can be a meditative act. Almost everyone who gazed at it for any length of time mentioned continuing to see more things, and from different angles they had new observations of color, form, and texture as well. 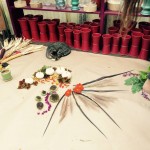 Tacca thought it was a good spot for a nap…

This idea of a meditative design is an interesting one. A customer even wanted to take a picture of it for a friend about to have a baby so she could concentrate on it while she was in labor! 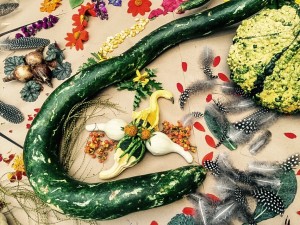 With the start of our first mandala this past summer,  Jamie, Molly, and I had begun by gathering our “ingredients”.

Many people have asked whether we made some sort of design on paper before we began. While others probably can be that organized and clinical about it, none of us are, and I’m actually very happy to say there really wasn’t any planning involved in either the summer version or this one. 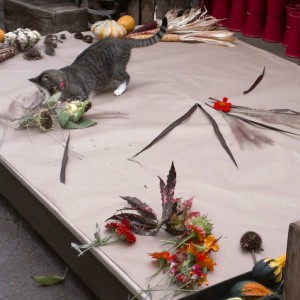 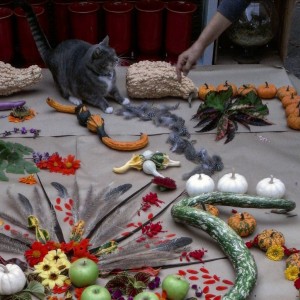 Liam got in trouble going after the guinea hen feathers…

So we began by gathering the things that spoke to us of fall, randomly laying them on our sections bit by bit and snitching blooms and leaves from various plants  between helping customers.

At the end of this post,  I’ll list everything we used since it may be hard to tell from the pictures. Wish you could all have seen it in person! 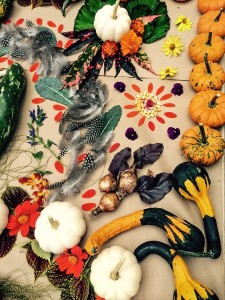 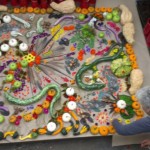 As we had done for the first one, we emptied the stage floor completely and laid out a backing of brown Kraft paper that all of our botanicals would be laid on.

And, it turned out our garden shop cats, Tacca and Liam, wanted very badly to get in on the fun again.  It seemed like a repeat of July!

In fact, the very first pieces I had chosen,  the long, dark leaves of a Pennisetum named ‘Princess’, were quite obviously cat toys in Tacca’s eyes. They both loved the fluffy, light, guinea hen feathers too. We were worried we weren’t going to get very far with this project. 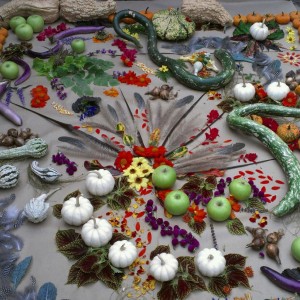 But it turns out we have the perfect shop cats. Really, we do. They got bored pretty quickly with our shooing them away constantly, gave up on trying to get those wispy feathers, and strolled off to find some other adventure (or a nap) elsewhere.

Some of the first things we pulled for our fall mandala were, of course, pumpkins and gourds. The snake gourds are so interesting;  it was impossible not to use them as a dark green counterpoint to all the brighter colors of flowers and leaves. 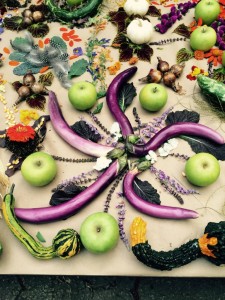 The ‘Better Late Than Never Garden‘ added its life to our design too, as we snipped  blooms from massive tithonia plants and the last of the season’s cutting zinnias. The towering hyacinth bean vine in full bloom at the very top of the arbor is so tall it was hard to get many blooms from it,  but the beautiful shade of purple from the few we had turned out to be very pretty in contrast to the orange colored blossoms we’d already gathered. 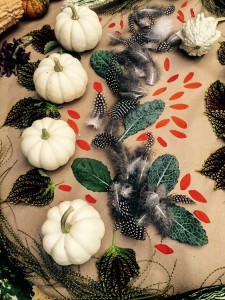 Other deep hued elements like the purple eggplant with its pretty shape, the dark blooms of African blue basil, and various salvias worked well too.

A particularly pretty grouping, I thought, were blue-green lacinato kale leaves interspersed with guinea hen feathers and single petals of bright orange tithonia.  In fact, many blooms were pulled apart to use, including marigolds with their orange-red streaked yellow petals. 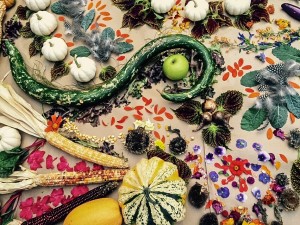 I stand back and look, studying what we’ve made.  Hmmm….I really like the green apples against the purple eggplant but the tiny white miniature pumpkins are pretty wonderful too. 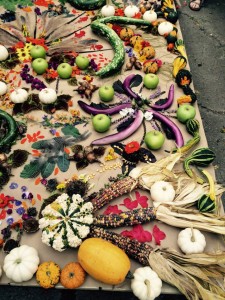 Oh, but look at the  beautiful leaves of red leaf lettuce, silvery veined heuchera, the chard’s brilliant red stems,  and that gorgeous green rex begonia. Really, it’s impossible to pick a favorite spot, so I’m going to  stop trying and just meditate on it for now…because that’s what a mandala is for. 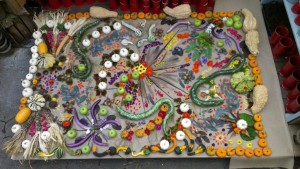 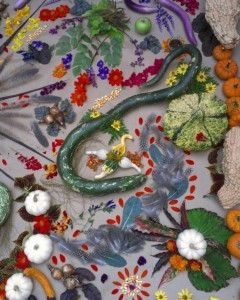 I know describing the elements doesn’t quite convey the creation of it,  which was pretty much an instinctive  process.  I can say with authority that  it is a really wonderful way to spend time, and we left it in place for a few days (Amazingly, the cats continued to ignore it!). 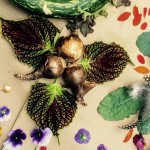 Finally, it was time to dismantle it, as the tithonia  blooms were beginning to fade, the coleus and other leaves were curling, and we needed the space for shop business again. We’re already looking forward to the next one – our winter version, in January, 2016. Stay tuned! 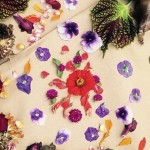