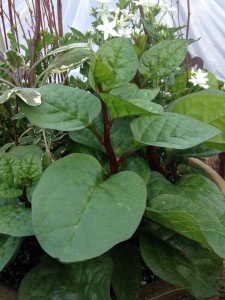 One of our growers called the other day, offering a few trays of a plant called Malabar Spinach. “It’s a heat tolerant green that we can grow in the summer,” she said.  “It also grows like a vine with really big, spinach-like leaves and pretty ornamental red stems.” Well, how could I resist that? I ordered a couple of trays, received them, and promptly planted some in a couple of combination planters.

Jay put one on each of the trellises in the garden across the street, too, so we could see how they grow out in the ground. Basella alba ‘Rubra’ is native to India and Indonesia, so it’s used to some heat, and, unlike other leafy greens such as kale, lettuce, and mustards, it needs heat to thrive. It’s the perfect plant for Alabama in the summer!

Malabar spinach is also known as Ceylon spinach, Indian spinach, vine spinach, and Malabar nightshade and will grow 8′-10′ tall or more; so give it something to climb on. The flowers are inconspicuous. Some references say to remove them so the leaves don’t become bitter; others just mention that the seed the flowers produce is commonly used to make a purple dye where this vine is native.

Garden writer Barbara Damrosch calls this her “everything green”…the one she picks when she needs green in a dish for color, taste, or nutrition. Young leaves are best, and there are many recipes online. Both leaves and stems are edible. The hotter the weather, the faster it will grow, especially if it’s provided loose, rich soil with plenty of moisture, sun, and a sturdy support.

Since it’s still August and the temperatures are heating up, this might be a good addition to your late summer vegetable garden. Alternatively, it can be planted along along a fence or on a trellis where you can enjoy its ornamental beauty until frost. If you’re in the Crestline area of Mountain Brook, you’ll be able to watch ours as they grow in the garden across the street. It’s fun to try new things!