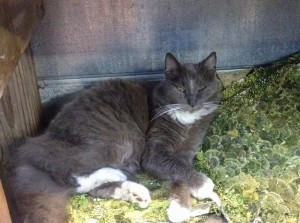 When I started at Oak Street Garden Shop there weren’t any shop cats. This didn’t seem unusual at the time; they just hadn’t found us yet.  Billy and Ellen had tried to introduce a couple of kittens the first year, but the stories I heard were of potting benches being used for…well, you possibly get the picture. At any rate, by the time I arrived the following year, there weren’t any. 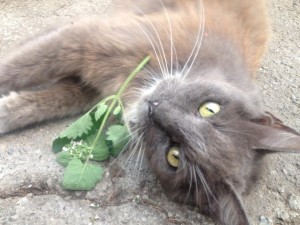 To be honest, I don’t remember when the very first cat found us (He probably wandered over from the country club golf course just down the street.). He was black and white and hiding under Mauby’s restaurant’s outdoor eating deck next door, so we named him Dexie. He didn’t hang around long though; he was very feral and we never could get too close. 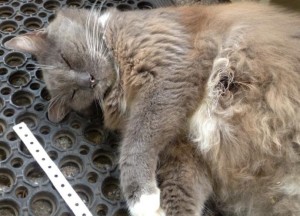 Our first true garden shop cat was Gracie. A big feral gray cat, he came a long, long  way in the approximately 20 years he was with us. At the beginning no one could get anywhere near. Being such a big beautiful cat, we were sure this cat was a girl and decided Gracie was a fitting name for such a beauty. Getting this one to the vet proved to be quite an ordeal.

Trapping was the only answer because there was absolutely no getting near this cat to coax it into a regular cat carrier. But we knew we had to get it shots and neutered too. It took weeks of trying, but finally we had this big gray fur ball  trapped and to the vet…and discovered he was a boy. We’d been calling him Gracie for so long by now though that there was no going back! 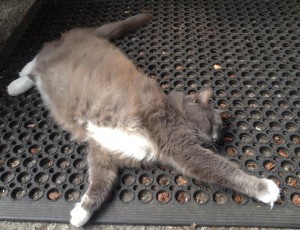 Gracie – strectched out
on a hot day…

Once that was done he seemed to know he was safe at the shop, and he would come and go.  He never liked to be locked in the greenhouse and would always find a way out, to Billy’s dismay since it usually involved creating a hole somewhere to slip out of, which of course let cold air in.

I’ll never forget having to get him to the vet for shots. We’d come far, by this point  and could get close enough to grab him to push him into a cat carrier – but we had to do it quickly!  He was the loudest, most obnoxious sounding  cat in the waiting room and shot out of that carrier like a bullet when the vet opened the door.  They had quite a time catching him to take care of his shots.

Gracie disappeared for months during the construction of city hall, and we thought something terrible had happened to him. We’d finally resigned ourselves that he was gone, though we still held out hope he was okay and would come back “any day now.”  I was home the Sunday that our friend Ann Blake, who helps feed other stray cats in the area, called me. “Guess who’s back!”, she said excitedly. “Gracie!”  Much thinner, and his entire stomach and back legs covered with dried up mud, he’d somehow  made his way back to us from wherever he’d been. 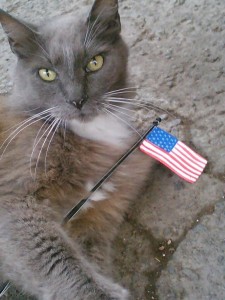 It may just be me, but I think that was his turning point. After that he was okay about being petted, even rolling over on his back and showing his tummy. He put up with occasional accidental watering (He could be hard to see, lying on tables behind plants!). In fact, Gracie was around so long he overlapped 3 other cats: Abby, Daisy and Ozzie.

One day, as we were all working in the back of the greenhouse, a shadow up above caught our eye. There was Gracie, on the very top of the greenhouse, nonchalantly taking a stroll across the roof. Days later Billy happened to see him too. To say he was not happy is an understatement,  as Gracie’s claws were poking holes in the poly covering…not good at all. Thank you, Billy, for not sending Gracie away! Unfortunately, we never could break our big gray cat of this practice, and the roof suffered for it. Finally, in his old age, he stopped, and thankfully no other cats have taken it up after him. 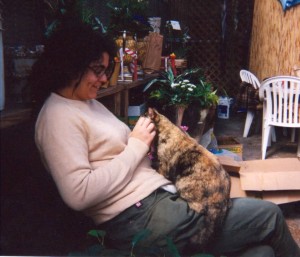 Every now and then Abby
would get on someone’s lap…

Abbie found us next, a tiny little tortoise shell cat with a stocky body and short, stubby legs. I still remember my first sight of her peaking around some pots at me.  It turned out she was pregnant. Fortunately an employee at the time, Andrea, was able to take her in until she had her kittens. We got her “fixed” quickly after that!

People would look at her and say, “What an ugly cat.” I thought that was terribly rude, especially since I thought she was very pretty. Neither Abby nor Gracie were the cats that kids could come and pet, and Abby actually liked to play hard to get, though she would follow me around the greenhouse and I became quite attached to her. 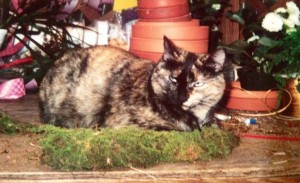 Abby – I never thought she was ugly…

One day a customer brought in an unlikely addition to a centerpiece – a stuffed bobcat. Jamie had the interesting job of centering this scary looking piece on a tray and working plants around it for the customer’s dinner party. When Abby caught sight of that bobcat, our poor kitty  was terrified. She did not want anything to do with it, and we were all so happy when it left the greenhouse!

Abby disappeared for a few long weeks too. Again, we thought, well she’s gone and Gracie will be the lone garden shop cat again. I will never forget the day she came tearing through the greenhouse doors wild-eyed and collapsed in the entrance, heaving from having been running so quickly.

I’m not sure what happened to her when she was gone; she had problems with her ears after her disappearance, even after we took her to the vet to have them checked out. 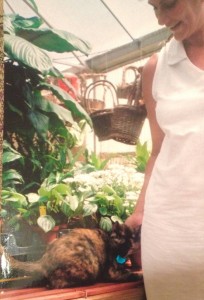 But to see her racing through that door…she must have been so happy to be back. It was after that vet visit, when I took her home to recover, and after she’d been hit by a car, that I decided to keep her.

She became my garden cat, following me everywhere, just as she’d done at the greenhouse. Sadly, she died of an aneurysm a few years later. I still miss her very much. 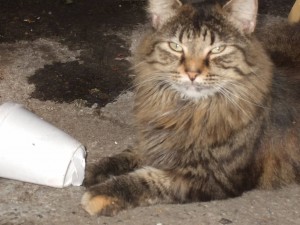 Next was a long-hair beauty that arrived as a kitten, all big eyes and fur. She was crying behind the greenhouse and was a very sick little kitty. After trips to the vet, she was much healthier, and we decided to have a naming contest for her. 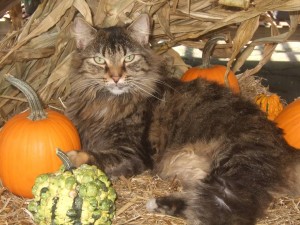 We  received many suggestions and put all the names in a bowl and drew. A little girl won who’d chosen the name Daisy. Daisy was a sweet thing, and the pictures we have of her on the pumpkin display only capture a tenth of how charming she was.

Unfortunately, she disappeared not long after she arrived, and we choose to believe that someone took her home (She’d been known to wander down the road toward other businesses.). I hope she’s happy and living in luxury wherever she is. 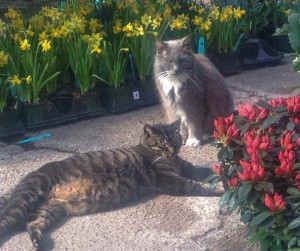 Ozzie appeared one day and stayed, and eventually he and Gracie became very close, sleeping together and generally hanging out with each other. It was nice that Gracie had a buddy. Ozzie always kept his distance from us,  though you’d find him sleeping in the sun down in the herb section or taking a nap in of all places, the potting bench. When Gracie disappeared (This time for good, we’re sure, since he was about 20 years old.), we could tell 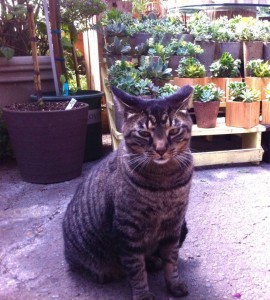 Ozzie is the old man of the greenhouse…

Ozzie was definitely lonely, and we’re glad he  finally allowed us to pet him. Ozzie comes and goes, and we all worry about him crossing the street to go over to the library. He’s the cat you might have heard loudly meowing on the corner (He has a very distinctive meow.), as if to tell traffic, “I’m here; let me across the street!” 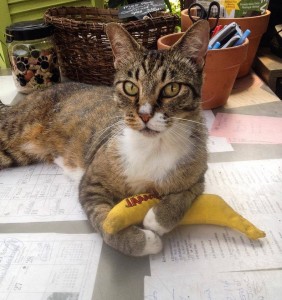 Tacca…not long after
she found us…

In May, 2014, two weeks after Gracie disappeared (and we were all a little down because we feared the worst), a former employee, Jay, heard crying under the pinestraw pallets and went to investigate.

He found a very scared and hungry young cat, really just skin and bones. It  ventured out, and we gave it some food. Oh my, she was so hungry and ate prodigiously that first week.

We named her Tacca, after the bat plant, and took her to the vet. From a start of 5 pounds to now over 11, she has filled out and has turned into a dream of a garden shop cat. 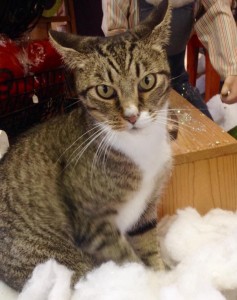 Tacca in the “snow”

In fact,  Tacca has become so popular children come to visit her. She found the perfect spot during the holidays, settling in each day on the fake, cottony “snow” in the display behind the front counters – a great place to watch all the action during the holidays, and cushy enough to take a nap. 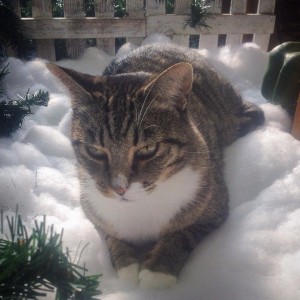 Tacca in the “snow”

Best of all, there were always children coming in and they all wanted to pet her! What a long way she’s come from that sad-eyed and painfully thin young cat.

She is also extremely territorial and won’t hesitate to bop little dogs on the nose if they get too close. She’ll stare down big dogs too!

One day a very sweet, young gray cat, with white paws and amazing yellow eyes came sauntering in the door. It happened to be Saint Patrick’s Day, 2015.  Just as we had with Tacca, we tried to find out if he belonged to anyone who might be missing him,, but no one came forward. We finally named him Liam, the Irish equivalent of William – and he became Billy Angell’s namesake. 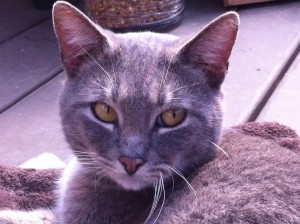 We tried to keep his arrival a secret from Billy, thinking (rightly) that he would not be ecstatic about a 3 cat shop.

This was working out okay (Billy isn’t very cat observant.) until, one day, a customer who’d been talking with Billy looked over at  Liam who happened to be walking by, and said, “Is that a different cat?  Where’s Tacca?” We knew then the jig was up and we’d have to tell him we wanted to keep this little guy. 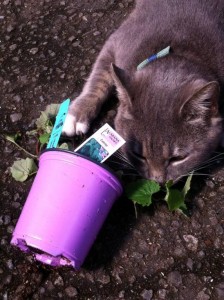 Liam found a pot of catnip…

Unfortunately for Billy (but happily for the rest of us), he really didn’t have much of a chance to say no since a  customer had already insisted on helping pay for neutering and shots. So Liam was officially another of Oak Street Garden Shop’s  feline ambassadors.

He’s also the most portly of our cats now. Please, no treats after hours for him! 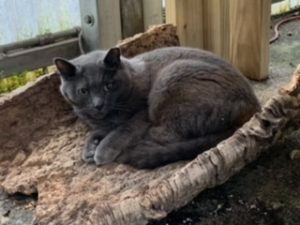 Our last kitty who found us is also the most feral, and shy – though we’re working on him. He’s decided he is Bert’s cat, since Bert is pretty much the only person he’ll let pet him. Spooky is his name, and we think it’s apt since just looking at him can make him turn tail and run. He is also Ozzie’s friend, and on sunny days he, Liam and Ozzie are usually sunning themselves outside in the nursery.

We’re so happy customers and children enjoy their company as much as we do and know that both Tacca and Liam (not so much Ozzie and Spooky though) will love getting attention and pets from all the kind people we see every day. We began 30  years ago with no shop cats. Now I couldn’t imagine Oak Street Garden Shop without them.