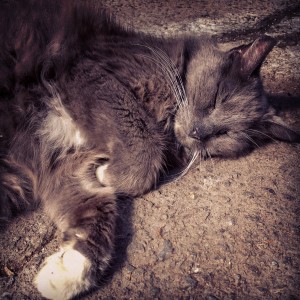 Gracie has been gone over 4 weeks now. When he found us about 20 years ago, he wouldn’t come near any of us,  keeping  his distance, eyeing us warily, and occasionally venturing close enough to get a pet. It was an ordeal trapping him in order to get him to the vet! (That’s when we found out the cat we’d been calling “Gracie” was actually a boy..) 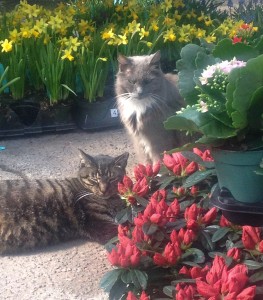 We worked and worked though, and eventually, as the years went by and employees came and went, he gradually realized we meant him no harm. And, while he still wouldn’t allow many others to pet him, we finally gained his trust and often he’d roll over on his back and offer his tummy for a good pet.

He and Ozzie became friends, hanging out and napping together. Gracie has disappeared before for long stretches at a time, but this feels different. And, knowing his age, our conclusions are the same…we hope he just curled up and went to sleep. 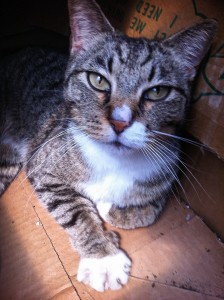 Such a sweet face…

So, obviously, we’ve been missing Gracie, and so has Ozzie. Funny how things work out though.

A week ago Jay heard a cat meowing under the pine straw pallets.  What he discovered was a skinny, very hungry, little gray tabby who was more than happy to be coaxed into the greenhouse and fed. And feed her we did! 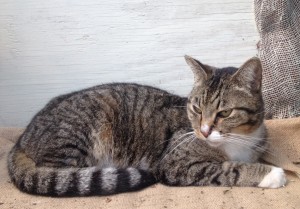 For now she’s quite content just to be with us in the back of the greenhouse, watching us work and receiving the occasional pet or hug. She’s not sure about Ozzie, greeting him with hisses and growls; but we’re certain they”ll work it out, and we’re giving Ozzie plenty of extra attention! 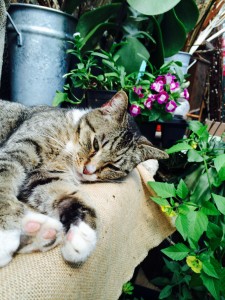 She is a very sweet kitty, and we’ve named her Tacca. Yes, we’ve heard it’s a crazy name, but we kind of like it and have nicknamed her Lady Tacca. (Think Lady Gaga if you’re not sure how to pronounce it.) And, it’s the name of a really cool plant that is also called cat whiskers!

Mind you, Jay is calling her Poodle (?) and our friend Ann Blake is insisting on Lily, so who knows what she’ll end up answering to. The poor thing will probably be endlessly confused! If you’re in the area, stop in and introduce yourself to the newest member of our team. I’ll be putting her in charge of feline cuteness.