It was a spring Saturday in April, and the day before Easter, a steady, busy day with all sorts of customers, everyone in good spirits. There were young couples with children, husbands and wives out and about on the holiday weekend getting plants for projects, an elderly man with two relatives helping him select his purchases – he used to come in regularly, but now we see him only on holidays. We got him a chair and he sat comfortably while his family brought him plants to look at and choose from. 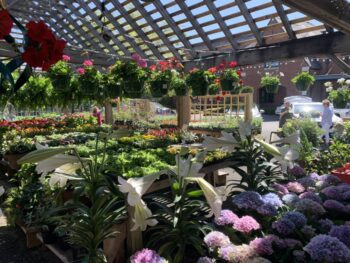 More and more people came and went, some with one or two things, others with many flats and pots set out by their cars, their children clamoring, wanting to know where the cats were so they could pet them.

I noticed two women, the older one in her 70’s with who I assumed was her daughter. They kept a bit to themselves, walking and looking. I asked if they were finding what they needed, and the older woman said “Yes,” and turned away, so I left them to look on their own. A while later I checked on the daughter, and she pulled out her phone to show me a picture of the area they were trying to find some plants for, saying they lived 3 hours south. She also told me her brother had passed away almost two weeks before and she thought the trip up to Birmingham to buy plants would be good for both of them.

I looked at the picture, an overhead shot from at least a third floor window onto a formal garden below. “Oh, how beautiful!” I said. “The center area used to be a pool,” the daughter explained, “and we want something for the large planter in the center where it used to be and some plants to fill in the quadrants around it.” By this time her mother had seen us chatting and joined us. She too told me that they were from a few hours south, not mentioning the loss of her son. But knowing that this was not a simple road trip to buy plants but something they’d decided to do as an antidote to their grief felt very special.

I chatted with them, helping them choose interesting and heat tolerant plants that would work in their new space. “Do you know what gomphrena is?” I asked. When I found out they didn’t, I said, “Oh, it’s a tough, tough plant, one of my absolute favorites, and we have a special one that everyone loves. It’s a carmine pink, and so beautiful! It is a bit of an ugly duckling in a pot, but once it’s planted and growing I think you’ll love it too, and it will hold up through the heat of summer.”

By the time we were finished, with their selection of plants by the car, they were both visibly more relaxed and smiling. I feel certain the daughter probably wondered why she’d told me about the recent death of her brother, but I’m so glad she did. Knowing of their grief, of their special mother daughter trip together, helped me help them.

And I hope their grief was eased, even for just a little while, at a bustling garden shop on a spring Saturday in April.