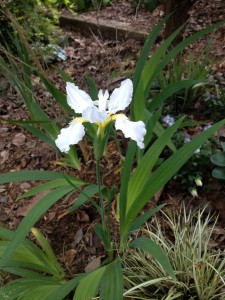 The days are becoming warmer, and the white Japanese roof iris are beginning to bloom. A charming iris, it spreads slowly in part sun and the fresh green iris fans are lovely as a counterpoint to other plant forms in the garden.

Iris tectorum ‘Alba’ is the one shown here in my garden…and the one we carry, grown by a local supplier and available now. 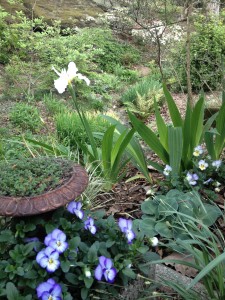 Though its common name is Japanese roof iris, it’s actually native to China. Botanist
Carl Maximowicz (1827-1891) discovered it growing on roofs in Japan in the early 1860s. In an earlier dynasty, an emperor, during a period of war, decreed that only food (rice and vegetables) would be grown in the ground – no flowers. So, the resourceful Japanese grew these flowers on the edges of their thatched roofs. They were the original roof gardens and must have been quite a sight to come upon! 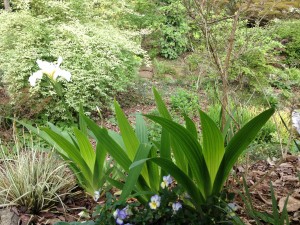 In addition to providing beauty in a time of war, the ground roots were the source of the white powder used to whiten geishas’ faces. I must say researching plants is not boring at all; the tidbits learned can be fascinating.

When in bloom, this pretty iris is about a foot tall and the fans droop a bit, so the groundcover effect is quite lovely. The bloom period lasts 2-3 weeks late April into May.