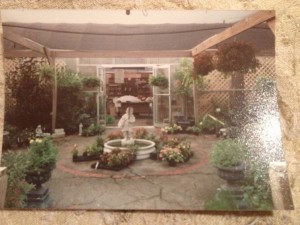 How do you describe the passage of  30 years in a blog post? That’s a tough question, and one I grappled with for quite some time before writing and rewriting this first post. The process would probably be easier for an outsider, dryly describing dates, events, and facts, I thought. 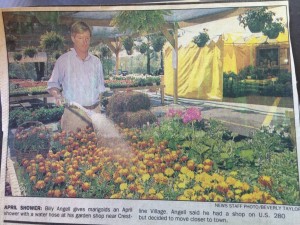 Billy and the yellow tent…

But, having worked at Oak Street Garden Shop for 29  of these 30 years, it’s so much more than the passage of time marked as dates on paper. It’s all of the wonderful customers we’ve known from the very beginning, many becoming friends, and, sadly, more than a few with us only in memory.

It’s the vendors we’ve created lasting relationships with, through the boom years and a few rocky spells, steady compatriots in a fickle, tough business. Though we saw a few of those fall by the wayside, too…greenhouse and nursery owners that finally gave up their dreams.  Nothing stays the same. In 30 years there have been so many changes. And the sturdy greenhouse itself, once shiny and new, also shows the passage of time, though it’s been well and truly loved. 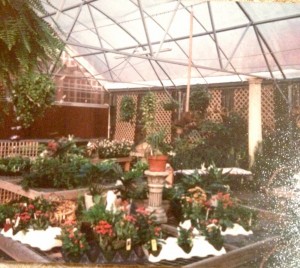 It’s the employees that have come and gone through the years, each having brought their unique personalities, talents, and humor to their jobs, making each day one to look forward to.  The ones that have moved on and those that have stayed are all players in its history and have contributed so much.

Looking through various assorted pictures, it’s obvious there are gaps. 30 years ago we didn’t have ubiquitous cell phones out and ready to capture every moment. It took effort and thought to remember to bring the camera, get some photos, and hope our chosen shots turned out. 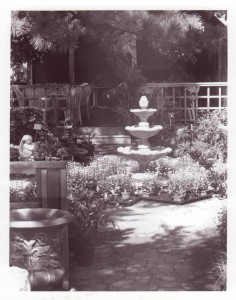 So Billy Angell established Oak Street Garden Shop without any fanfare on a chilly day in March, 1990, by putting up a yellow tent and setting some flats of bedding plants on the table he’d set up under it. His greenhouse was nearing completion, and he was sitting in the middle of what used to be a parking lot in the center of Crestline Village, in his hometown of Mountain Brook, Alabama.

He had aptly named this new venture Billy Angell’s Oak Street Garden Shop. Outwardly he exuded confidence, but he also knew he had to succeed, since he had a mortgage, 2 children, and a wife to support. At the end of each day of business he rolled down the sides of the tent, picked up the cash drawer, loaded it into his car, and went home. 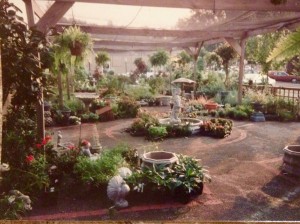 The first project on this site had actually begun earlier with the design and building of a shade house, constructed on weekends. This was a simple flat structure, with a shade cloth laid over it, to protect plants from the hot sun and scorching heat that radiated off the asphalt of the old parking lot.

He worked steadily, as curious people watched  and asked questions. One day two young women walking by stopped and asked him what he was building. “I’m going to open a nursery,” he replied. They smiled and walked on, then turned around and came back. “What ages children will you be accepting?” 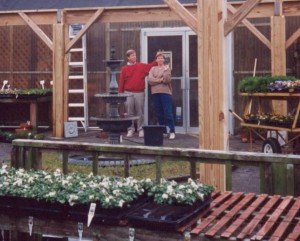 That January, he left his other job for good and was ready to begin building his greenhouse. It would have just enough room for a tiny office and restroom tacked on to one end (Until it was completed, the  “facilities” consisted of a port-a-john and plants were watered with a hose hooked up to the restaurant next door). The greenhouse was finished that fall having been completely built by himself and a young boy, Tanner Broughton.

Oak Street Garden Shop was now officially in business with full time help from a former employee, Ellen Riley, and part time help from a neighbor. Having run a much larger nursery and landscape company previously, his smaller version was the perfect fit for him and the community,  nestled next door to a favorite local restaurant and situated  across the street from Mountain Brook’s City Hall and fire station and the much loved Emmet O’Neal Library. It was truly a neighborhood garden shop. 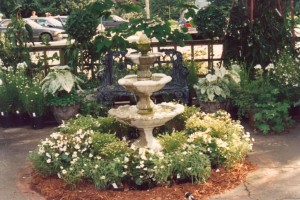 Vignette at the end of the nursery…early 90s

As that first year progressed, it seemed the local residents enjoyed having plants available in their community, and they supported their hometown entrepreneur. The Birmingham News even came out and took a picture. He outlined “beds” in paint to delineate where “paths” through the nursery should be, envisioning an English garden with perennials, shrubs, and planters eventually filling in the empty spaces…and, slowly, they did.

The next year it was apparent that business was going well, and the addition of a second full time employee was warranted. This was more than a little nerve-wracking for Billy, as he wanted to get just the right person for his brand new business. Many people applied for the job, including me. 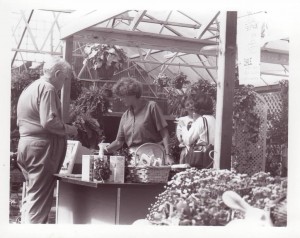 1991…Kris at the first cash register…

The day I applied I had gotten lost and pulled into the Fire Department to ask where Oak Street Garden Shop was located. The fireman grinned and pointed across the street. “Over there,” he said. I looked, there was no sign yet, just a few plants and a greenhouse (How did I miss that?!).  I was the most persistent applicant it turns out,  and it paid off, as he wasn’t entirely sold on me, but gave me the job anyway. He tells me now that Ellen had to talk him into giving me a shot.

My first days at Oak Street Garden Shop were rocky. Asked to weed a pot in the nursery, I dutifully grabbed a handful of weeds and fire ants raced up my arm, stinging me to pieces. It also  took some  time  to acclimate to working virtually outside through the heat of summer in the south, as I was from the relatively cooler midwest. But I hung in and slowly but surely became hooked.

As the years progressed, we weathered the historic Birmingham blizzard of ’93, (We’ll explore that in a future post.) more employees came, a new shade house was built, customer’s tastes dictated more planted containers, a fresh produce area was added, and a garden came to life across the street. More on these developments in the next posts.